Happy Leap Day.  Today’s “Debut Print Book Feature is Sweet Enemy by Heather Snow which sounds fascinating.  We developed a little questionnaire for Debut Print Authorsand every Wednesday at 10:00 AM CST (as long as we have content) we’ll post the questionnaire answers along with links to the author’s site and a buy link to her book. I hope this helps people discovery new books. Now, on to the answers. 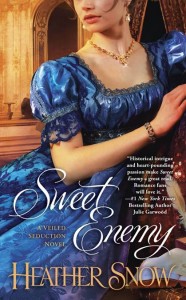 2 sentence summary:  Beakers and ball gowns don’t mix, so when a lady chemist goes undercover as a husband-hunter to investigate the earl whose family she thinks murdered her father, romance isn’t part of her formula.  But it only takes one kiss to start a reaction she can’t control…

Genre: Regency Historical Romance with a touch of mystery

What makes this story different:  My heroine is not your average bluestocking—she’s a chemist who uses her unique and specialized knowledge to get herself into and out of some tight spots, romantically and otherwise.  Liliana and Geoffrey, while certainly people of their time, are progressive in both their attitudes and goals.  And Liliana gets to blow things up in the story J.

Is this a series? If so what book #: Yes, SWEET ENEMY is the first in the Veiled Seduction series, each featuring  science-savvy heroines, the mysteries they must solve and the men who both help them and stand in their way.

Why you wrote this book:  I was inspired by an interesting museum exhibit detailing an event that occurred during the Regency period. (Sorry to be so vague, but I don’t want to say what exhibit, lest I give away part of the mystery!  It is explained in the author’s note when you finish the book).  However, I can say that scientists were involved, which started a “What if?” mystery in my mind.  I then started to create characters that would fit the story idea.  My decision to make Liliana a chemist really came from the “write what you know” adage first time writers hear all of the time.  Having a chemistry degree myself, I thought I could lend my voice well to her character.

Why is this your first published book? How many did you write before?:  SWEET ENEMY is my first completed manuscript.

What’s your writing process?  Since my stories involve mysteries, I tend to loosely plot that part of the book first…I need to be certain the story will hold together through the end.  Then, I start thinking about characters who will both fit into that mystery and be the perfect foils for each other.  I delve into their backgrounds, figure out what makes them right and wrong for each other, and plot their character growth and romantic arcs—again, very loosely, as I’ve found if I plot too much, I kill my creativity.  Then, I start writing scene by scene, discovering the fun of the story and the characters as I go along.

Your next published book:  The second in the series, SWEET DECEPTION, releases August 7.  It features a Regency era Bones (of the Temperance Brennan variety versus the Star Trek), who gets tangled up with a Regency era James Bond.

The last book you read that you loved.  Oh wow…I’ve read a lot of books I’ve loved lately, but the last one that made me stay up all night because I just couldn’t put it down was Sarah MacLean’s “Nine Rules to Break When Romancing A Rake.”  I adored it.

The last book you read for research.  SECRET SERVICE – British Agents in France 1792-1815 by Elizabeth Sparrow.

The romance book character you most identify with.  I’d say Sara Fielding, from Lisa Kleypas’ incredible “Dreaming of You”.  I am certainly bookish, I can be absorbed and enthusiastic in my work, I’m fairly self-contained and independent and I have a deep need for security…yet a part of me longs for adventure.  I wonder if I’d have been brave enough to spar with Derek Craven.  I like to think I would J. Thanks for participating, Ms. Snow. You can find more about Ms. Snow’s work at her website: http://heathersnowbooks.com/