M.K. Hobson calls it "bustlepunk": a nineteenth century America in which military warlocks serve in President Grant's Secret Service, zombies labor in gold mines, and spells can be mail-ordered from the magical equivalent of Sears & Roebuck.   That mass-produced magic is about to put hometown witch Emily Edwards out of business, however, and a lavender-laced love spell only multiplies the problems she's trying to solve.   Can a bewitched trans-continental adventure in the days of steam trains and pantalettes be totally engaging and eerily relevant? Yup.   Hobson makes it look easy.

A six-word memoir for your protagonist, Emily Edwards:

If only I’d used less lavender! 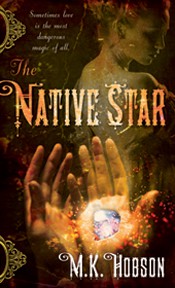 The original triggers or inspiration points for The Native Star:

My favorite books have always been the ones that make history come to life-‘like “Age of Innocence” by Edith Wharton or “The Magnificent Ambersons” or even just the “Little House on the Prairie” books. Before I even had a plot or characters for THE NATIVE STAR, I knew I wanted it to be set in the 19th century. I wanted the reader to be drawn into a different time and place, just as my favorite books had pulled me in.

The book's title comes from a magical stone that becomes embedded in Emily's hand, an injury that has a mythical feel to it.   How did that detail come about?

You know, I can’t remember-‘it’s always been part of the story! From a plot standpoint, Emily and the stone had to be inseparably bound so that she was obligated to pursue her quest. But you’re right, there is a mythic feel to it-‘in cultures around the world, hands often symbolize human action and choice. Given that so much of what happens in the book revolves around making right (and wrong) choices, I guess I was smarter than I even remember!

Your hero, Dreadnought Stanton, appealed to me early on, but it's hard to explain why, especially when one character refers (pretty accurately) to Stanton's "snobbishness, his impatience with human frailty, his rigid worldview."   How did you know he was hero material?

Stanton illustrates a concept I believe to be true: having integrity does not necessarily make you a good person. Like most heroes, Stanton adheres to a powerful ethical code-‘and self-discipline and strength of will are generally very attractive traits. But whether he’s a good person or not … well, that remains to be seen. I think that ambiguity is what makes him so intriguing.

Stanton tells Emily about the three traditions of magic, one of which is credomancy. Can you give readers a quick crash course?

Credomancy is basically faith magic (which, Stanton notes in the book, has been profitably employed by churches for thousands of years) secularized. It involves the literal bending of reality based on what the public can be made to believe is real. In credomancy, power is built by carefully crafting messages-‘usually disguised as entertainment-‘to support whatever beliefs serve the credomancer’s end. I see it as a uniquely American brand of magic. And the latter half of the 19th century in America is a perfect moment in history for credomancy to have flourished. Post Civil War advancements-‘urbanization, industrialization, and   technological advances like the first transcontinental telegraph-‘represented the earliest groundwork for the global mass-media of today.

And of course, Stanton teaches Emily lots of other things too, often more than she has patience for.   What does she teach him?

Stanton’s dignity and sense of self-control are bandages he uses to cover old wounds-‘but he keeps them wrapped too tight. She helps him find balance and perspective-‘and even moreso in the sequel.

One magical power Emily discovers in her adventure involves creating new words, which I think reflects a real joy in language that comes through in your writing.   In your gift of naming, I rank you up there with Charles Dickens and J.K. Rowling.   Cassandras, exunge, squink, sundered-‘is it actually tough to come up with such pitch-perfect, effortless-sounding names for imaginary things?

I’m so glad you find this an admirable talent, since it frequently drives my poor copyeditor insane. Like most writers, I truly love words, especially chewy and obscure ones. They collect in the corners of my brain like little lexical dustbunnies, and so whenever I need to come up with a name for an imaginary thing, I always have a wonderful assortment to choose from.

An unexpected research detour you made while writing The Native Star:

American feminism and labor movements in the 19th century. The character of Penelope Pendennis (who has gotten a great response from many of the early readers) was originally a generic Russian countess. But alas, Madame Gorohovskaya wasn’t pulling her weight, so I fired her and replaced her with Penelope, a dress-reforming women’s rights advocating social crusading witch. I always used to scoff when authors talked about their characters going rogue, taking over a scene or even a whole book-‘I had more control over my characters than that! But Penelope has made a fool out of me. She has very much taken on a life of her own, and is demanding to be put in a lead role in a future book or books.

Number of books you wrote The Native Star sold:

Four, actually! The first was a high-fantasy bookstop I obsessively wrote and rewrote during high school and college. Right after college, I scrapped that to work on a disaffected Gen-X Jay McInerney knockoff. That mercifully aborted attempt was followed by a post-apocalyptic science fiction thriller, which was followed by a quirky secondary world steampunk/time-travel mashup. I’m still trying to rewrite that last one, because I think it has promise. Except I’ve taken the time travel out, thank god!

Communications consultant. I write things and design things and make websites and just generally help my clients communicate more effectively. I don’t expect to be able to quit my day job any time soon-‘but that’s fine, because I really like my clients and since I work for myself I have a lot of freedom in how I structure my day.

Your oddest or most reliable writing ritual or habit:

Carne asada tacos from Rigoberto’s. Rigoberto’s is this 24-hour Mexican drive through a few miles up the road from my house. Not only do they make the best carne asada I’ve ever tasted, their red and green salsas are utterly addictive. I reward myself with a taco run after I’ve completed a particularly difficult task like copyedits or page proofs-‘whether I finish at 3 p.m. or 3 a.m., they’re there waiting for me, all spicy and juicy and delicious.

Three things that feed your creativity:

My dog (and the long walks she takes me on), my daughter (and the sometimes mind-boggling questions she asks) and my book collection (which exists in a continual state of flux.)

Your favorite book when you were 10 years old:

The Little House on the Prairie series, hands down. I especially loved Laura’s voice throughout those books. She was level-headed and down to earth without being passive or drab. She had such spunk and humor and creativity! I would have liked to have Laura Ingalls for a best friend when I was 10 years old. I like to think we would have gotten along famously as long as I didn’t get on her bad side. Because as we all recall from her treatment of Liza Jane, Laura could straight up cut a bitch.

That one’s easy-‘”Up in the Old Hotel” by Joseph Mitchell. I’ve actually given at least a dozen copies of this book away as a gift over the years. Mitchell was a writer for The New Yorker in the 30s and 40s, and “Up in the Old Hotel” is a collection of his pieces from that time. The writing is lapidary and the window into New York in a different era is uniquely inspiring.

M.K. Hobson is treating a commenter with a copy of The Native Star and a lavender sachet, so chime in below   for a chance to win.   At www.demimonde.com, you can   find Hobson's blog and a ton of other cool stuff, including podcasts of short fiction.   If you want to contact Alyson H., who does the Intro Interviews, you can write DAintrointerview AT gmail DOT com.