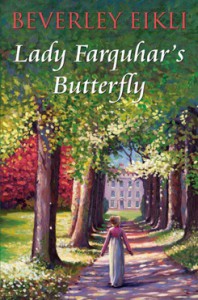 Alyson:   After reading Jayne's review of A Ruined Season, I was interested in other romances published by the same company (Hale Publishing).   Beverley's second book provided the opportunity.   The initial premise of this historical, a woman who must fight for custody of her child after being declared "unfit," seemed to have contemporary overtones, but at its heart, Lady Farquhar's Butterfly is classic melodrama, sweeping emotion, layers of secrets, and hidden treasure all included.   One of those secrets is what Lady Farquhar's butterfly is exactly, so just for fun, take a guess in the comments.   My favorite guess (not the right one, so don't go spoiling or googling) will win a copy of the book.

A six-word memoir for your protagonist, Lady Farquhar:

"Husband wanted: dashing rakes needn’t apply.' As a headstrong debutante Olivia eloped with a dashing rake. Seven years later, when I take up the story, she's paid the price.

What were the original "triggers" or inspiration points for Lady Farquhar's Butterfly?

Like most of my books I like to start with an interesting set-up or conflict and work from there. It was only after I'd finished writing Lady Farquhar's Butterfly that I realized how much I'd unconsciously based my heroine's fragile state of mind at the beginning of the book on personal experience.

A few years ago I did a three-month contract in French Guyana working as an airborne geophysical survey operator. I was the only female on a crew of 14, I was missing my husband (no email or cheap phone calls), grieving for my mother who'd died unexpectedly six months previously, and the working conditions were very difficult. Eight hours being shaken about in a Cessna 404 200 feet above the jungle in high heat and 98 per cent humidity made me constantly sick so that my weight had dropped below 36kg by the end of the contract. Physically and emotionally I was at my lowest ebb.

Like my heroine, it took a tragedy – in this case involving one of my colleagues – to jolt me out of my self absorption and depression and to take charge of my life.

I enjoyed writing the sensual scenes, however my favourite was the single violent scene which takes place over the sarcophagus of Olivia's late husband in the family crypt.   This is where Olivia shows what she's made of and the villain struggles to manipulate the woman he's held in his power for so long.

Who is the worse villain, Lucien or the Reverend Kirkman?

What a brilliant question. Lucien is the evil shadow who haunts Olivia from the grave. His spectre causes her to doubt herself, the validity of her feelings and to doubt Max, even though Max is utterly steadfast and dependable.   The Reverend is much more subtle than Lucien in his manipulation and ultimately more dangerous. Olivia has almost no experience of decent men in her life until she meets kind and honourable Max, which is why she’s confused by her feelings for him. I think it’s a matter of opinion as to who is the worse villain. Lucien was certainly more handsome!

Max and Olivia fall for each other such a short time after they meet.   You convinced me the risks they took for each other were well-motivated, but I wondered why you set such a challenge for yourself.

I was a skeptic of love at first sight until it happened to me! I met my husband around a camp fire in Botswana the day before I was due to fly home to Australia and marry my boyfriend of 8 years (about the same length of time Olivia had been married to Lucien). When my boyfriend met me at the airport and called the whole thing off I was shocked but relieved and immediately wrote to this handsome Norwegian bush pilot I couldn’t get out of my mind.

Fortunately the feeling was mutual and after eight months of snail mail (letters took 2 weeks to reach the Okavango Delta) Eivind had saved enough holiday leave to fly to Australia where he immediately proposed. Having spent less than 2 weeks in his company I gave up the career I’d worked so hard to achieve as a features writer on a metropolitan daily, my close-knit family and friends and the town I’d lived in for most of my 28 years to join Eivind in a remote thatched cottage in the middle of a mopane forest with no telephone or hot water in the middle of Africa. After 16 years of wonderful, adventure-packed marriage I write romances which I think are far more plausible than my own.

Every time I thought all the secrets and twists in Lady Farquhars’ Butterfly had been revealed, you had another in store.   Are you the kind of writer who works out those kinds of things ahead of time, or do they come as you’re writing?

I rewrote the ending from half way through the book three times! Finally, I did some serious brainstorming with my husband who knows how my ‘devious mind’ (his words) works. By this stage I felt I really knew Olivia and Max so that I could rework my original (failed) plot in order to make   their reactions plausible. Coincidence, unusual characters and amazing timing have been such factors in my having had such an extraordinary (and ultimately happy) life that I’d believe any plot as long as the characters behaved true to their natures.

Having said that, I’m much better at seeing where the story takes me until the half way point before stopping and carefully working out the rest of the plot from there. It’s a much more efficient method of writing.

Number of books you wrote before your first sale:

Seven. I was seventeen when I finished my first 550-page epic and it took me a while to realize that drowning the heroine on the last page or fashioning her after Thackeray's viperish Becky Sharp in Vanity Fair were not winning formulas.

When I did my first author chat at the local library and question time went for over an hour.

1. Past experience and stories I've been told. Cocooned for eight hours in a small plane surveying the jungle of French Guyana or the Greenland Icecap with a lonely pilot is a good apprenticeship for a romance author.

2. Reading social histories of English life between 1750 and 1850. So many wonderful story possibilities jump out, usually involving the oppression of, or lack of opportunity for, women – a challenge for me to construct a scenario for them to break out of the mould in a historically believable fashion.

3. Walking our Rhodesian Ridgeback, Homer, around Dixon Field after the kindy drop-off. This is my most productive half hour of brainstorming or potboiling.

Early mornings are my most productive time so I try to wake at least an hour before the rest of the household. With two kids I just love silence.

Persistence is the key element to success. This quote from James Baldwin, who thought will was the crucial element to a writer, strikes a chord: "Do this book or die. You have to go through that. Talent is insignificant. I know a lot of talented ruins. Beyond talent lie all the usual words: discipline, love, luck, but most of all endurance."

So many! I started my writing life as a cadet on a country newspaper, went to a metropolitan, was a safari lodge manager in Botswana where I met my lovely Norwegian pilot husband, got into aerial survey flying for a few years, returned to Australia and worked on a number of magazines. Post publication (in full length fiction), I've taught English to foreign students and I currently teach creative writing at the local Further Education Dept.

Karleen Koen's Through A Glass Darkly set during the South Sea Bubble financial crisis in England during the early 18th century. I loved the multi-layered plot with its surprising twists that overlaid a rich and vivid backdrop and its characters that continue to resonate twenty years after I read the book.

The U.S. release of Lady Farquhar's Butterfly has been delayed, but The Book Depository ships free internationally (and don't forget to leave your guess for a chance to win a free copy).   Beverley's website its www.beverleyeikli.com.   Alyson does the Intro Interviews, and you can contact her at daintrointerview AT gmail DOT com.