Filmmaker Alfred Hitchcock popularized the term “MacGuffin,” using it as shorthand for whatever object put the characters (and the story) in motion. For Hitchcock, the MacGuffin mattered mainly because the characters cared about it enough to go after it–whether the audience precisely understood it was a secondary concern.

Today’s novels all feature a story centered around an object of desire. Are the objects true Hitchcockian MacGuffins? I ask the authors about that. But first, a little about the books: 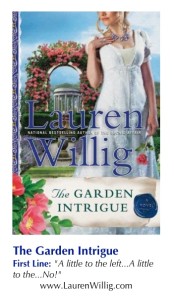 In Susanna Kearsley’s The Firebird, it is the story of the object rather than the object itself that provides the chase, one that crosses maps and centuries as a psychic antiquities dealer tries to discover the secrets of a Russian woodcarving. First sentence: He sent his mind in search of me that morning.

In Lauren Willig’s The Garden Intrigue, spy Augustus Whittlesby goes undercover as the worst poet ever, all in the name of finding Napoleon’s secret weapon, which may or may not be hidden at Josephine Bonaparte’s estate. First sentence: “A little to the left…. A little to the…No!”

The Missing Manuscript of Jane Austen in Syrie James’s book doesn’t stay lost, which means readers get the treat of a story-within-a-story, experiencing Austen’s “first” novel along with a librarian and British aristocrat of the present day. First sentence: The minute I saw the letter, I knew it was hers.

SUSANNA KEARSLEY: I freed myself by being myself.

LAUREN WILLIG: They seek him here, they seek him—oh, wait, that’s been used already. Um, how about: When Napoleon asks you to write a masque, you say yes.

SYRIE JAMES: Samantha McDonough is a Special Collections Librarian at a small private university in southern California. Rebecca Stanhope is a rector’s daughter in England circa 1801.

LAUREN WILLIG: Giddy widow/socialite in public, privately passionately interested in issues of drainage and engineering. (Hey, we all have to have a hobby.)

What readers will love about the hero:

SUSANNA KEARSLEY: Rob (who some readers may remember from his first appearance as the young Scottish boy with Second Sight in my novel The Shadowy Horses) is strong, comfortable in his own skin, and dependable, which sounds really boring, except with Rob, it…isn’t.  And Edmund, in the 18th century sections of the story, is the good kind of bad boy, complete with scars, inside and out. Both of them, really, are easy to love.

SYRIE JAMES: Anthony Whitaker is a smart, handsome, hard-working, goodhearted Englishman who learns, through his admiration for the heroine, to love Jane Austen. The hero of The Stanhopes is an excellent man of outstanding moral character, who would do anything for the woman he adores.

LAUREN WILLIG: Doesn’t everyone love a poet in a puffy shirt? At least, until you read some of his poetry. Augustus Whittlesby puts the verb back in verbose. And the adverb. And lots and lots of adjectives.

SUSANNA KEARSLEY: In an Edinburgh sidestreet, at night, in the rain.

SYRIE JAMES: 4) I can’t give that away! You’ll have to read the book and find out!

Tell readers about the object your characters are after. Was it a starting point for your story, or something that evolved as you wrote?

SUSANNA KEARSLEY: The Firebird is a small wooden carving, brought in to my heroine’s gallery by a woman who desperately needs the money from its sale, and needs to prove its origins. So in one sense, it’s the history of that carving that my characters are chasing. But in another sense, the “Firebird” they’re chasing is a person, too—the heroine of the past story, Anna, who once owned the carving. If they want to learn the carving’s past, they have to find and follow Anna’s path. Both Anna and the Firebird carving were there on the page at the beginning of the novel—they’re the seeds from which the story grew.

SYRIE JAMES:  The lost Jane Austen manuscript that Samantha goes in search of was definitely the starting point of my story. Every Austen fan despairs that she only wrote six novels. I thought: what if there was a seventh, but somehow it went missing? Wouldn’t it be thrilling to find, and read? In “The Stanhopes,” Rebecca and her father are cast out of their home and livelihood when he is accused of misappropriating church funds. What happened to the money? That question haunts them on their journey and becomes the object of an important quest.

LAUREN WILLIG: It’s a bit tricky, since I can’t reveal the actual object without my major spoilers since my characters don’t know exactly what it is, either, until the very end. My hero, who has been undercover in Paris as an excruciatingly bad poet lo these many years, has had word that Napoleon has commissioned a top secret device to aid in his attempted naval invasion of England. In this case, the device definitely came first, since the device was one that Napoleon actually did commission, and it’s one of those incredibly cool, quirky, historical fun facts that I just couldn’t resist using in a book. And that’s where I’ll have to stop, since I don’t want to give too much away….

Besides being a literal thing, what thematic or symbolic importance does the object in your book have?

SUSANNA KEARSLEY: The Firebird is a familiar character in old Russian fairy tales. In every version of the tale, the hero sets off on a quest to find and catch the Firebird, and bring it back. But really, it’s the journey, and the unexpected lessons and rewards it brings, that always prove to be the greatest treasure, of more value than the bird itself. So in my book, the Firebird carving serves as a reminder of that fact—that, as Rob puts it: “What you bring back with you in the end might not be what you started out in search of to begin with.”

SYRIE JAMES: The missing Jane Austen manuscript is not only an important and exciting discovery for enthusiasts of literature, it is also a valuable commodity, which could make its owner extremely wealthy. In “The Stanhopes,” the discovery of the missing money is of crucial importance to the Stanhopes; it could rescue them from dire circumstances and return them to the life and home they loved.

LAUREN WILLIG: One of the things I loved about writing this particular device and scenario is that the hero, Mr. I Rely On No One But Myself Professional Spy, has no hope of getting near or understanding this thing without the heroine. Augustus initially writes Emma off as a flaky socialite, but it’s Emma’s connections to the Bonapartes that he needs to get an invitation to Malmaison, and, when he does finally get his hands on the plans, he can’t make heads or tails of them without Emma’s engineering know-how. So, in many ways, this device represents Augustus’s acknowledgment of interdependence. (It’s always fun humbling the hero, isn’t it?)

Do you consider the object of desire in your story a “MacGuffin”? Why or why not?

SUSANNA KEARSLEY: I’m not sure it is, in the classic Hitchcockian sense of the word. A true MacGuffin can be swapped for another item without changing the plot—it doesn’t matter, for example, what’s in those bottles in the wine cellar in the movie Notorious; Hitchcock could have changed the uranium to gold dust without altering the story. But the Firebird, I think, has a significance within the book that would have made it difficult for me to swap it with another object. If it was any other item, even any other bird, the story wouldn’t be the same. So no, it’s not a real MacGuffin, in my view.

SYRIE JAMES:  The missing manuscript is not really a MacGuffin in this story, since it is found relatively quickly; it is then the content of the manuscript, and its fate, that become the important and most pressing issues. In “The Stanhopes,” the missing money isn’t a MacGuffin either, because it’s not so much the money itself that’s important, but the truth behind its disappearance—upon which a main character’s profession and entire reputation depend.

LAUREN WILLIG: I would be disingenuous if I didn’t admit that a large part of the purpose of the Extra Secret Device was to throw Augustus in Emma’s path, but it also has significance in and of itself (see cool historical fun fact!, above). Among other things, Emma is an American who has close emotional ties to the Bonaparte family. She’s not automatically inclined to help an English spy. When it comes to deciding whether to help Augustus or hinder him, the nature of the device plays a large role. (Because it sure ain’t his poetry.)

In keeping with the theme, what’s the last thing you went hunting for?

SUSANNA KEARSLEY: A pencil with a point. They’re hard to find, sometimes, in my house.

SYRIE JAMES: I’ve been searching for several years for the perfect comforter set for my bedroom. My husband and I both love blue, but couldn’t find anything we really liked. I must have looked at 10,000 comforter sets in stores and online before I found the perfect one—and it was worth waiting for because it’s gorgeous!

LAUREN WILLIG: My work ethic. I keep misplacing it somewhere.

SUSANNA KEARSLEY: OK, so this will make me sound like a big geek, but that was the year my family went to Britain for the first time, and I was reading to prepare for it, and stumbled on an old used book I fell in love with: A Shorter History of Scotland to the Union of the Crowns, by P. Hume Brown. I read it over and over. It’s still on my shelves.

SYRIE JAMES: A tie between The Secret Garden and Anne of Green Gables.

LAUREN WILLIG: Gone With the Wind, hands down.

SYRIE JAMES: A new Jane Austen memoir, about her first young love. It’s the most amazing story; it’s never been told, and I’m having a great time writing it!

LAUREN WILLIG: My next book, The Ashford Affair, is a women’s fiction/historical fiction hybrid that rackets back and forth between 1999 New York, Edwardian England, Jazz Age London, and 1920s Kenya as a modern woman uncovers a long-held family secret that challenges everything she thought she knew about her family and herself. I call it my Downton Abbey meets Out of Africa book.


Many thanks to Syrie, Lauren, and Susanna for taking time out for this interview. If you’d like to be eligible to win one of today’s books, leave us a question or comment!