Best First Book: Your Roots Are Showing by Elise Chidley

Each year, RWA recognizes excellence in romance writing through the RITAs, considered the top honor in the genre.   Though awards are presented in a dozen categories, a writer has just one shot in her career to win the Best First Book award.   This interview series focuses on the debut authors nominated in that category.   Alyson H undertook to bring this idea to Dear Author and completed all the interviews.    This is our last interview. The winner of the Best First Book award will be announced this Saturday.

[Time: mid-spring.   Place: a bench at a noisy playground.]

Alyson H.:   Your Roots Are Showing by this new author, Elise Chidley.   Get this-‘this woman-‘she’s a mom with toddlers, and she writes an e-mail to her sister, complaining about how boring her life is, and how her husband just doesn’t do it for her anymore, even though he’s gorgeous and rich and most of all, British, and then-‘and then! She accidentally sends it to her   husband!   Instead of her sister!   And he leaves her!

AH:   No.   I mean, it’s touching-‘poignant, you know, but soooo funny.   And inspiring.   I unfolded my elliptical thingy last week and started using it, and it’s all because Lizzie takes up running as one way to put her life back together.

About Your Roots Are Showing– 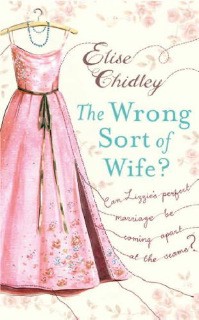 First, a six-word memoir for your protagonist Lizzie:

The original trigger was a house we rented briefly while living in England. It became the inspiration for the awkward, stripped-down house Lizzie finds herself in after her husband, James, walks out on her. I remember standing in the lobby of that house under the bare light bulb and thanking my lucky stars I didn’t have to deal with it alone. And yet there was something weirdly attractive about the place-‘what it lacked in "good bones’ it made up for in potential, if you just had a little imagination. So, rather than dealing physically with the house (which was temporary) I dealt with it at a fantasy level, making it the place where my heroine reinvents herself.

I would have guessed the misdirected e-mail scenario started things off. When did that aspect become part of the story?

The misdirected e-mail bit is based on various electronic mishaps that have befallen members of my family (and that’s all I’m going to say about that). Once I knew I wanted to write a story about a suddenly-single mum in a house so bare that it was a complete clean slate, I then had to come up with a reason why she was in this house without her husband. That’s when I developed the e-mail angle.

I love the moment when Lizzie’s estranged husband finds her out in the garden in a bikini, trying to stem the flow of a burst water pipe with her well-muscled new friend, Bruno, a landscape gardener. I really relish the thought of how James must be squirming-‘as well he might!

In your author’s note, you said one of your goals for the book was to “write something uplifting about a topic [postpartum depression] that’s not covered very much.” Did anyone warn you it was kind of risky to have a depressed protagonist? What did you do to make sure Lizzie wasn’t too passive and-‘ah-‘depressing a lead character?

Because the novel is romantic comedy, I tried to get around the ‘depressing’ aspects of Lizzie’s situation by showing the funny side of things. In my first draft, I think Lizzie was probably too introspective and bogged down in her situation. She spent a lot of time in her mind, rather than doing things. On the advice of my agent and editor(s), I made Lizzie more active-‘even so, most of the drama is in Lizzie’s own head. I always find stories of transformation uplifting, so I’m hoping my readers will too.

Among the projects Lizzie pursues in an effort to rebuild her life is the book of children’s nonsense verses she writes. The bits you include in the novel are delightful! Are there more where those came from?

I’m afraid I don’t have any more about the girl who would only wear pink, but one of these days I intend to write an epic nonsense poem about pirates for my son.

You included a lot of pairs in the book, it seems: Lizzie has twins, and two close friends. Two possible love interests for her, and two for her estranged husband James. Two gardens, two houses. Two important swimming pool scenes. Is this craft or subconscious at work?

Wow, there are lots of pairs, aren’t there? That was subconscious, but I think all these pairs underline one very important pairing: the two versions of Lizzie (depressed/run-down Lizzie versus reconstructed/’renovated’ Lizzie). The bottom line is, Lizzie has to make herself strong enough to survive alone before she has a decent shot at sharing her life. She has to reclaim the woman she was before sleep deprivation, pregnancy hormones, and the company of toddlers turned her into someone she probably would have found a bit of a bore, back in her single days.

What’s the best or most unusual fan mail you received about Your Roots Are Showing? 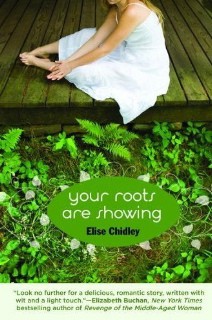 A group of women in South Carolina tracked me down through my web site and asked me to send them some questions for their book club meeting. They found the book at Target and loved it! Better still, somebody wrote a note to me today with the subject heading: Your Roots Are Ripping Out My Guts!

Your Roots Are Showing is your first published book, but was it really your first book?

No. My first book was a Regency romance written when I was sixteen, about a girl who dresses up as a boy to win a horse race. It stayed in a drawer for ages but eventually I fed it to a shredder.

About three years. I wrote in a very "part time’ way because I had three children under the age of four when I started the book.

I made an email approach to someone who had just left a big agency to start his own operation. I figured he would need new writers, and I was right.

The biggest surprise is that, when your book is finally in print, you still haven’t achieved your goal. You’re only at the beginning of the journey. I had no idea writers had to work so hard on the publicity aspects of publishing.

I have a novel coming out in the UK, in November, called Married with Baggage.

My most reliable habit is going back a few pages and editing-‘it makes breaking out onto the blank page easier, somehow. Perhaps my weirdest habit is taking a bath when I need inspiration. Lying with my head in a cloud of steam seems to stimulate deep areas in my brain.

A cup of tea, paper and a pen.

The biggest distraction for me is the Internet. Whenever I have an "off’ moment, the siren song of the virtual world grows very loud. So far, I haven’t dealt with this issue very well, but I’m thinking about making a rule that I can only check email messages three times a day.

Champagne and lots of phone calls; oh, and cyber cocktails with the Chick Lit Writers of the World.

Hmmm. Hadn’t thought of that. Is it too late to become superstitious?

The author who, despite your usual poise and eloquence, would reduce you to a blathering fangirl if you found yourself sitting next to her/him at the ceremony:

I’ve worked in journalism, publicity and as a college lecturer in English. Right now, I’m a "home executive’ -there’s no pay, but the perks are fabulous.

I love Catherine Alliott, an English romantic comedy writer who can make me laugh out loud in public places. I’m always recommending I Capture the Castle by Dodie Smith.

My own best first: my first positive pregnancy test. I should have kept that little stick with its weedy pink line, framed it, and made it the focal point of the living room decor! I’ve seldom felt prouder of anything in my life.

Your Roots Are Showing (published in the UK as The Wrong Sort of Wife?) is also up for the award for Contemporary Single Title Romance.   Winners will be announced at the RWA national conference in July.   Elise’s website is www.elisechidley.com.

Previous article: REVIEW: Surrender to the Playboy Sheikh by Kate Hardy
Next Post: REVIEW: Bound by Your Touch by Meredith Duran