JaneInterviewsDebut Books / romantic-suspenseComments Off on Best First Book: Interview with Kerry Connor, Strangers in the Night

Each year, RWA recognizes excellence in romance writing through the RITAs, considered the top honor in the genre.   Though awards are presented in a dozen categories, a writer has just one shot in her career to win the Best First Book award.   This interview series focuses on the debut authors nominated in that category. 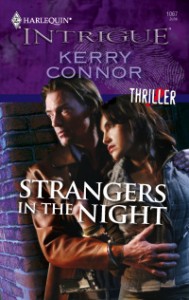 A cat-and-mouse chase on a dark street-‘a reluctant bounty hunter-‘a woman he’s not sure he ought to protect or use as bait:   the "meet" scene in Strangers in the Night holds all the tension and high stakes you want in a romantic suspense.   The bonus is Kerry Connor’s silky storytelling, which sinks you into character and story even as it lays the groundwork for the kind of twist fiction-readers crave.   No big surprise Kerry’s novel is also nominated in the Contemporary Series Romance: Suspense/Adventure category, too.

About Strangers in the Night-

STRANGERS IN THE NIGHT began as an attempt to try something different from my previous manuscripts.   The heroes in my earlier books had been nice beta guys, so I wanted to try writing an alpha hero.   The plots in my prior romantic suspense attempts had been fairly mystery-driven, so with this book I wanted to do something with a lot more action and pure suspense.

The specific plot had two inspirations.   I decided I wanted to write something with a moral dilemma.   This became less of an issue in the final book than originally intended, but anyone who’s read it will likely know where this comes into play.   Also, without getting into specifics, there’s a particular plot device common in the genre that I usually don’t care for, because the motivation behind it is often too weak.   So I wanted to use it, and have a very good reason for it.   Eventually I managed to pull all of these nebulous intentions together into a single idea, and STRANGERS IN THE NIGHT was born.

My favorite moment is a speech the heroine makes at a certain point in the book.   It’s bitter and angry and vengeful, all those things romance heroines are too seldom allowed to be.   That speech is one of the reasons I wrote the book, and I love the intensity and the raw emotion of it.   It also points to what I love about the heroine: that she’s not conventionally "nice" or "heroic" or, as she says in that speech, "noble."   She’s much more complex and, to me, more interesting because of it.   When I decided to try writing an alpha hero, it was important to me that the heroine be every bit his match, not just a wimpy damsel in distress.

At the same time, I wasn’t interested in writing an over-the-top, larger-than-life superheroine whose emotions wouldn’t be relatable.   Instead, she’s just a regular woman caught in an impossible situation and fighting with everything she has to survive.   As a result, she’s tough, fierce and, most of all, complicated.

I wasn’t sure if I could get away with that speech or would be asked to water it down, much like I wondered whether I could get away with several other things she says or does over the course of the story, especially in a category romance.   I did know all of those moments were needed to do justice to the character and her story, and I hoped readers would love her-‘and feel for her-‘as much as I did.   In the end, no one at Harlequin had a problem with any of the above, nor, it would seem, did the RITA judges.   It just goes to show: write the story you need to, and if you’re fortunate, people will respond to it.

The prologue to Strangers in the Night is masterfully done.   Instead of being a gimmick (readers see way too many of these), it serves a vital purpose in your storytelling.   Was the use of the prologue in this way part of your original plan for the novel?

The prologue was definitely an integral part of the story from the early planning stages.   I don’t think the book would work without it.   At the same time, it’s very much a Prologue, not a Chapter One.   Having seen prologues debated online, I didn’t know how it would be received, but I knew it was necessary for this story.

Your action scenes read so smoothly and vividly.   Are these types of scenes ones you see in your head before you write?

I usually try to write action scenes "in the moment."   I have a general idea of what’s going to happen, but I don’t plan them out in detail ahead of time.   I think (or at least, I hope) they flow better and are more involving if I simply sit down and write without a plan, letting the events unfold naturally and seeing where they go.

My fourth Intrigue, TRUSTING A STRANGER, will be released in November 2009, with a fifth, STRANGER IN A SMALL TOWN (the final Stranger book), scheduled for next spring.

Strangers in the Night is your first published book, but was it really your first book?

No, it was the fifth book I completed (though several years passed between the time it was finished and when it was finally submitted, with several more manuscripts completed in the interim.   But that’s a long, complicated and depressing story that, like so many I could tell, could be titled "How Not To Get Published.")

I always wanted to be a writer, and since I loved reading mysteries, that’s what I intended to write as well.   Then I discovered Harlequin Intrigue.   It wasn’t long after reading a few that I decided this was what I wanted to write: stories with both mystery and emotion.   I began my first attempt soon afterward.   That was in early 1991.   Okay, I was 12, and evidently no prodigy, because it took an embarrassingly long time to finish, picking at it over the years.   (Granted, it wasn’t exactly a priority during the high school years.)   It wasn’t until college when I finally picked up the pace, finishing that first manuscript and two more over the summers.   After college I realized I was going to have to figure out what to do with my life, and decided to really dedicate myself to my writing.   And promptly set about getting nowhere slowly, tinkering with short stories, screenplays and, always, romance novels-‘the dream that wouldn’t die.   From there, it took just under seven years of doing everything wrong to finally sell a book.   So I guess it was technically 16 years from when I started my first Intrigue attempt to when I finally sold, though it was just short of ten from my first submission to the one that sold.

I don’t have an agent.   Fortunately, Harlequin doesn’t require one to submit.   With STRANGERS IN THE NIGHT, I went the old-fashioned query route.

As a writer, what is it you love about romantic suspense?   Is it the same thing you enjoyed as a reader of the genre?

What I love about writing romantic suspense is definitely what I love about reading it, and I’m always hoping to deliver exactly what I enjoy reading in the genre in my own books.   Basically it combines everything I enjoy: action, suspense and the challenge of a mystery with character and relationship development.   But most of all, what I love about romantic suspense is the emotion inherent to the genre, the intense emotions of two people caught up in dangerous and/or mysterious circumstances and how those circumstances affect them, both personally and in the relationship that forms between them.   As a reader, I want to be engaged in those emotions; as a writer, I want the reader to be.

I love how romantic suspense, when done right, not only offers the best of both genres, but enhances those aspects, with the romance and suspense elements complementing each other in a way that each is stronger than they would be without the other.   The suspense element heightens the intensity of the love story, while the romance leads to more character and relationship development, and subsequently more involvement for the reader, than a standard suspense.   In both respects, it all comes back to emotion, and the emotional engagement that is greater than it would be in either genre individually and possible only in the combination of the two.

And of course, there’s the guaranteed happy ending, the assurance that no matter what huge stakes these people are facing, they’re going to come out on top-‘and come out better for having found each other.   The real world is depressing enough.   I’m not interested in reading books that are going to bum me out.   I certainly don’t want to write them.

A few things I’d heard or read along the way and wish I’d taken to heart sooner: Know your market, believe in your writing (because if you don’t, you can bet nobody else will), and submit the manuscript!

I really only have two must-haves: a pen and a notepad.   I write on my laptop (which I guess can count as the third), but I need something more concrete on hand when I’m plotting, outlining or working my way out of jams.   That’s where I turn when I hit a snag and can’t take staring at a blank screen anymore.

Your paying jobs pre- and post-publication:

"Miserable office drudge" seems like an efficient catchall to describe all of the above. <g>

When it comes to romance, some of my all-time favorite authors are Anne Stuart, Tess Gerritsen and Jennifer Crusie, particularly their category books.

RITA winners will be announced at the RWA national conference in July.   Kerry’s website is www.kerryconnor.com, and she blogs with other Harlequin Intrigue authors at www.intrigueauthors.com.

→ Jane
Previous article: REVIEW: Start Me Up by Victoria Dahl
Next Post: In Re the Changing Face of Business of Publishing