Behind the Scenes of a Connected Series at Harlequin: The Making of the Notorious Wolfes

I emailed Sarah Morgan and asked if she would take us into the world of connected series books. Mills & Boon published a terrific, eight book connected series called the Notorious Wolfes (US) or Bad Blood (UK). Heroically, she came through with insight from the Harlequin Presents editor and all of the eight authors. It’s a fascinating look behind the scenes.  Part one posts today and is about the backstory. Part two posts tomorrow and is about the individual stories.

Behind the Scenes of The Notorious Wolfes

I think it’s a truth, unanimously acknowledged here in Harlequin’s London office that we LOVE brainstorming continuities – and if you were twisting my arm I’d have to say that The Notorious Wolfes series has been my absolute favourite so far.

Commissioning continuities for a series allows authors the scope to deliver a bigger read whilst sticking to their series word count – not only does the reader get a hero, a heroine and a happy ending, but also, in this case, the opportunity to get to know the whole family – the good, the bad…and even the ugly.

So how did we put the idea together? I’m glad you asked…

First of all, we decide on the setting – has Harlequin Presents recently been flooded with Sheikhs / Greeks / Italians? What would add strong variety to the line-up, but also deliver the glamour and intensity readers expect? And we also like to try something just a little bit different – in the case of the Wolfe family we made them British, and conceived a dangerously dark and rather more murky past than usual.

Next step – research! We’d never be able to come up with half the sensational exploits without the scandals of celebs through the ages. So we trawled through magazines and websites looking for suitably scandalous inspiration. Up to date with the essential pop culture, we armed ourselves with a LOT of coffee, sufficient amounts of biscuits (sugar really helps!) and off we went…

The Notorious Wolfes was brainstormed by eight editors, locked in a meeting room for around an hour a day. It was massively intense, but so very rewarding. There’s definitely a real creative buzz in the office when there’s a continuity brainstorm on the go.

Creating the Wolfe family came first. We had SO much fun coming up with the sordid and brutal past of patriarch William Wolfe and definitely get carried away (hence the 81 pages of the final continuity ‘bible’ – 15 pages of which were devoted solely to William, who is dead before the continuity even opens!!) Get that many creative and romance–loving brains in a room together though, it’s a wonder that we pulled together a document that made any sense at all!

Then it’s on to the individual stories… We know in advance which authors will be writing which book, and we kept that in mind when creating their characters. We try really hard to stick to just set up the hero and heroine, their conflicts and pasts…it’s no secret that we can get really carried away. However, what’s so important to us is that the authors feel able to connect with their characters so we try very hard not to be too prescriptive.

As mentioned, we draw a LOT of inspiration from real-life notorious families and Hollywood A-listers – so as we’re brainstorming, most of the characters are known by their ‘celebrity’ namesake. It’s only right at the end that they get give a proper name! For example, can you guess which one the tortured and tormented Wolfes, was 100% Christian Bale… in fact, he’s still referred to by editors aplenty as Christian!

By the end of the process (usually about 2 months of daily meetings) the bible is ready to be sent out. Not only did we felt like we knew the Wolfe family better than our own but were all not-so-secretly in love with at least one of the heroes –  I have to admit to being torn between two…which is no hardship!

The books are edited by the author’s individual editors, and are then given a ‘continuity edit’ by one editor – hopefully to eliminate any major timing gaffs etc. However, from the moment the first Notorious Wolfe manuscript was in house they were being frantically e-mailed around the editorial team – we just couldn’t wait to see these stories come alive.

The next Harlequin Presents continuity, The Santina Crown is coming in April 2012 – we hope you enjoy….it’s over to you to guess the celebrity inspiration behind each of the characters! Coincidentally, we’ve literally just started to brainstorm the continuity for 2013 – so if there’s anything you’d like to see, now’s the time to let us know… 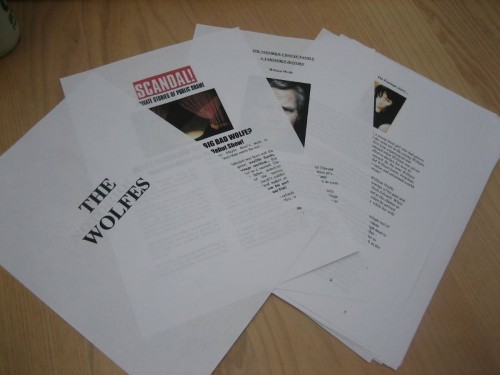 The “story bible” is the foundation of any continuity series.  The purpose of the bible is to lay out the world as well as the background details and shared history of all the characters in the series, so that the individual authors will be able to use it to tell separate yet connected stories set in the same universe.  The bible also lays out the basic plotlines of each of the proposed books, and notes certain details each story must contain in order to advance the larger continuity plot.  But this isn’t the same as being handed a detailed plot synopsis or outline, by any means.  The bible creates a foundation and suggests some architecture for the series and the separate books, but it’s up to each author to build a rich story of her own.

The Wolfe bible was 81 pages long.  It reads like its own book!  It starts with a newspaper article describing Nathaniel Wolfe’s precipitous departure from a London stage (which opens the first book in the series, Sarah Morgan’s A Night of Scandal) to give us a taste of the story but also show us what kind of people the Wolfes are.  Then it tells the long, scandalous, and often heartbreaking tale of William Wolfe and the women who bore his eight children.  It’s very detailed.  The bible also gives us the real story of Jacob Wolfe, whose reappearance is such a major event in his siblings’ lives.  Then the bible breaks down each of the eight different books.  In the Wolfe series, they gave a lot of backstory for each character, and then sketched out the basic plot they wanted us to write.  If the author finds that some of the details don’t work on the page as she writes, though, the editors are usually quite open to hearing suggested changes—they do very much want the authors to make the books their own.  At the end of each plot sketch, there are some bullet points of continuity items—for example, characters who need to talk to each other, or certain relationships that have to be shown building in, say, book two so the author of book five can really hammer them home.  The bible contains a selection of pictures (of Wolfe Manor, for example, so everyone was describing the same place) and a detailed time line of everything that happens in all eight books, as well as a historical timeline of all the history mentioned throughout.  There’s a family tree and, finally, a detailed character chart noting all the characters’ looks, heights, ages, significant others, and so on.  It’s quite extensive!

In addition to the bible, the authors usually set up an email loop where they can all discuss the continuity together.  They also tend to email back and forth when using each other’s characters in their books, to make sure the characterizations stays consistent throughout.

The editors suggest that all the authors read through the bible and refer to it, but then let it sit in the back of their minds as they write their own stories set in this world they’ve built. I hope readers feel we all pulled this off!