Winged Cat (aka a Tairen Soul) Spotted in China 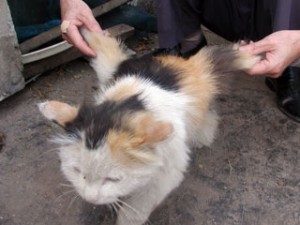 CL Wilson, author of the NY Times bestselling high fantasy romance series, Tairen Soul, writes about winged shape shifting cats. Her latest book, King of Sword and Sky, is due out September 30. According to a news report, a winged cat has been found in China. Apparently, the wings developed as a defense mechanism because the cat was so desirable to the opposite sex (also a true feature of Tairen Souls):

One cat owner, identified only as Feng, claimed her pet’s wings were the result of stress from too many females desiring to mate with him, the Mail reported.

I hope the Tairen Souls come and claim their poor lost offspring. After all the whole series is about the fact that the winged cat like creatures are dying off. (BTW, I like this series).