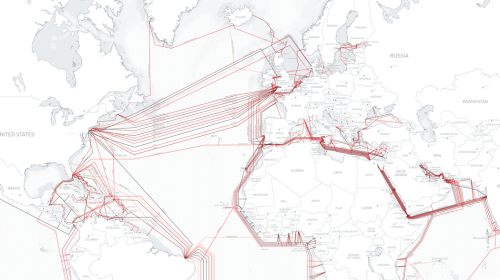 Thought this was very cool. The screenshot captures just a tiny portion of the entire world’s fiber cabling.

PayPal Bans Major File-Hosting Services Over Piracy Concerns | TorrentFreak – “In recent weeks, PayPal has cut off many of the world’s largest filehosting sites from its service including MediaFire, Putlocker and DepositFiles. Growing concern over copyright infringement has resulted in an extremely strict and in some cases privacy-violating set of requirements being laid down by the payment processing company” TorrentFreak

Paypal is asking for a lot of concessions from these companies including the right to snoop on user’s files. I’m wondering if Dropbox will be next. I’m also surprised that Paypal wants these rights because it seems to me by having them, Paypal could be on the hook for misdeeds.

RT is going to add a digital component to their magazine and is asking for reader feedback.  Click on the title of the article to see the survey.

http://www.realwire.com/releases/Yodelmobile-Launches-App-Discovery-Campaign-for-Kobo – Yodelmobile will be monitoring Kobo’s app store positioning and using data from the campaign to gain visibility into the number of apps downloaded, from which sites users were driven to the store and the demographics of who has downloaded it. The integrated tracking also gives full visibility on app usage – such as whether users are heavy readers, medium or light and when they have purchased a book – and Yodelmobile is able to change messaging to target readers with specific promotions or genres. Kobo’s Head of Digital John Gareau commented, “We want to bring the best mobile e-reading service to as many people as possible. The Kobo apps allow you to read Kobo books on multiple mobile devices and you’re also able to continue reading on the web and the Kobo e-reader.” RealWire PR

I read a brief blurb on The Bookseller (which was essentially a rewrite of the press release and not a very coherent rewrite at that) and had to go seek out more information. Essentially this app is watching your habits and tailoring ads specifically for you. Of course, this relies upon spying on your reading habits.

Random House Audio Invites Fan Fiction Authors to Record Their Stories at Comic-Con International in San Diego « Audio Blog – “One story will be selected by RH Audio producers to be recorded professionally and streamed online! At this year’s Comic-Con International in San Diego, CA, Random House Audio will be recreating an audiobook studio right on the convention floor–inviting authors of fan fiction to record a sample of their work for a chance to have their story recorded and produced as a digital audiobook. Stories from the following fandoms are eligible for the contest: Star Wars® The Inheritance Cycle by Christopher Paolini Percy Jackson and the Olympians by Rick Riordan The Hitchhiker’s Guide to the Galaxy by Douglas Adams Artemis Fowl by Eoin Colfer”  Random House

Those are all properties owned by RH? I’m not sure but the authors would have to give permission would be my guess. But the devil is in the details. Fan fiction has been a huge success for them in the guise of 50 Shades and perhaps Random House is trying to see what other existing properties they can leverage into bestsellerdom. Even better for RH, they won’t even have to pay you. If you sign up for the contest, you are conceding all rights to this work: