Barnes & Noble reportedly instructs local stores to pull Amazon titles – Some Barnes & Noble stores were carrying Amazon published books until it was reported by blogger MobyLives (who has several Amazon is killing publishing posts). Now B&N has sent a company wide email instructing those books to be removed from the shelves. The lack of in store presence is affecting sales of Penny Marshall’s autobiography My Mother Was Nuts which, in the first week, sold only 2,000 print copies according to Bookscan. paidContent.

It is 28 in the paid Kindle store, 36 on the USAToday list and 33 on the combined Print and ebook list for the NYTimes. The lack of a paper presence has to be hurting it somewhat but how much, I guess we’ll never know. 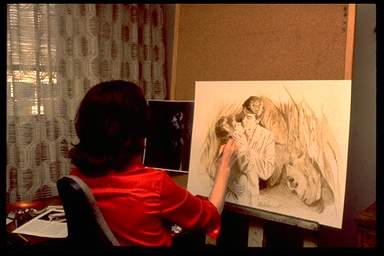 Here it is fully developed with a suggestion of a cave they’re in. There is a mystery in this book, a suggestion that the hero might actually be dangerous, a killer! That’s why I chose to have his hand on her throat, so you don’t know whether he’s going to kiss her or kill her! The rest of the background is left white as in the entire series of nineteen I did for Victoria Holt books.

Craigslist vs. 3Taps: Ownership Of User Generated Web Content At Stake – Craigslist and 3Taps are engaged in an intellectual property battle fighting over who owns user generated content. 3Taps takes Craiglist postings and creates a searchable database. Craigslist sued for copyright and trademark infringement. The result may have far reaching effects on who owns content that you or I create on websites such as Goodreads, Twitter, and Facebook. TPM Idea Lab

3D printing: Difference Engine: The PC all over again? – I’ve addressed 3D printers briefly before but with the actual printers falling in price and technology advancing, the spector of copying actual items will shake up intellectual property in a significant way. Copyright generally applies to the exclusive distribution of intellectual property – not actual things itself. It is not the book that is copyrighted, but the text printed inside the book. CAD drawings are the basis for the 3D printers and DMCA might apply to remove postings of those drawings. However, enterprising individuals can create their own CAD drawings based on existing objects. There are a number of really interesting concepts being created by 3D printers and while I don’t agree that the DMCA needs to be extended as the Economist suggests, there are new issues that are going to arise and areas for abuse on both sides of the aisle.

“In that, the record industry was remarkably successful. Today, websites and ISPs have to block or remove infringing material whenever they receive a DMCA takedown notice from a copyright holder—something that happens more often than actually justified. Google reckons that more than a third of the DMCA notices it has received over the years have turned out to be bogus copyright claims. Over a half were from companies trying to restrict competing businesses rather than law-breakers.”The Economist

→ Jane
Previous article: Daily Deals: From arranged marriages to failed marriages
Next Post: REVIEW: Reflected In You by Sylvia Day