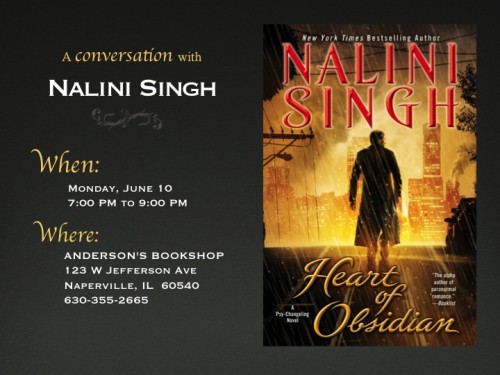 Anderson’s offers “priority numbers” to readers in order to be at the front of Nalini’s signing line. You can receive a priority number by purchasing your copy of HEART OF OBSIDIAN at Anderson’s now! Simply ask the store to provide you with a priority number when you purchase your book and bring that number with you to the event on June 10th. You may also purchase the book online through Anderson’s website,www.andersonsbookshop.com, but you will need to indicate in the message box that you are attending the event and would like a priority number. Anderson’s will then respond via email with the number.

Don’t forget we also have a book club chat for Nalini Singh’s Heart of Obsidian on June 15. We’ll deconstruct this book, the series, and start the speculations for the future. I promise I know nothing and will be speculating/guessing along with every other reader.

“Personally, we would be hard-pressed to say The Silver Crown has ‘significant’ literary value and is a work ‘of great import,'” Richman wrote. But, he concluded, “we cannot simply dismiss the work as nonserious literature because it deals with werewolves and other paranormal creatures and activities. For better or worse, some segment of the population is fascinated by werewolves and other mythical beings. … Werewolves, in fact, have played a role in popular fiction for centuries.” Law.com

Could Bookless Libraries Revolutionize Access for the Poor? – In Bexar County, a suburb of San Antonio there is no public library and no book store. This was due to underfunding. The county put money toward a 5,000 square foot library that is digital only. There will be no paper books. Instead, there will be 150 e-readers that can be checked out two weeks at a time, 50 computer stations along with tablets and laptops. Patrons will be able to check out materials on their computers and smartphones. Is this increased access for the underprivileged? I suppose if the underprivileged have access to wifi and a smartphone. The former isn’t so difficult. Many McDonald’s these days have free wifi. The smartphone may be tougher but companies are increasingly interested in providing low cost smartphones. Perhaps ebooks will help decrease the digital divide. The Atlantic Cities

Harper Shares Data on Light Third Quarter; Shows Investors Profitability of eBook – Publishers Marketplace unpacks the financial data released by HarperColllins. The main points included that a few big books drive the business such as George RR Martin’s UK sales at $15 million or Sarah Palin’s US sales clocking in at $40 million. It also confirmed what we readers always suspected and that is digital books are more profitable.

It’s hard to say whether digital books have a higher margin because the costs of the production of a book (cover, advance, editing, marketing) is absorbed in the print version or whether it is an apples to apples comparison but according to the information provided by Harper, “the ebook edition is 39 percent more profitable, returning an additional $2.20 in profit to the publisher over the hardcover. Authors and agents will immediately note that much of the additional profit exists because the royalty allocation once earned out is $1.58 lower on the ebook than for the hardcover. On a hardcover, the author earns 30 percent of the publisher’s gross revenue, and 42.5 percent of the total margin (what the author and publisher together earn). For now, on the ebook, the author earns 25 percent.“ Publishers Lunch

What do women want? Sex, according to Daniel Bergner’s new book on female desire. – Slate Magazine – In Daniel Bergner’s What Do Women Want? he suggests that women are as sexually aggressive or more aggressive in a natural state than males but that because of the male dominated society and the fear of cuckolding, a woman’s desire is suppressed or conformed to the male gaze. It’s an interesting concept and the article has some thought provoking questions such as whether women have adopted the male gaze as their own and begun to objectify themselves. Slate

Thanks to Jil for the link.

→ Jane
Previous article: REVIEW: Entwined with You (A Crossfire Novel) by Sylvia Day
Next Post: REVIEW: Fire Inside: A Chaos Novel by Kristen Ashley