Disaster Relief, CPR Certification, Donate Blood – Hurricane Sandy has devastated communities from Haiti (that had not yet recovered from the earthquake) to Canada, but much of its devastation was on the eastern seaboard.

The RedCross is asking for monetary donations and has indicated that its blood bank is low. You can text the word REDCROSS to 90999 to make a $10 donation or visit your local RedCross to make a blood bank donation.

In the Eye of the Storm: Capturing Sandy’s Wrath – Sandy was wreaked devastation from Haiti (who hasn’t recovered from the Earthquake) to Canada. The Times (link in the title) and the Atlantic  both have compiled some amazing photographs.

This Atlantic link (different than the previous one) is particularly useful because it debunks some of the photographs being shared. I.e., no actual sharks in Jersey but yes, the large portions of the Atlantic boardwalk appeared to be subsumed by the water. 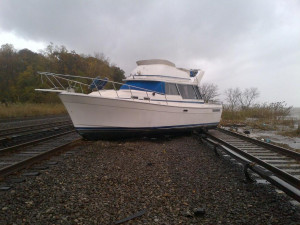 I particularly liked this random one. Lose a boat? Times, Atlantic, Gawker

And wait, there’s more, we are also looking for 25 VIP members to join ‘Sony Readers Book Club’ who will each receive a Sony Reader device and cover with light, as well as the first four Book of the Month ebooks for free. In February, the 25 VIP members will also be invited to an in-person book club and meet-and-greet with author Michael Connelly in Los Angeles. The VIPs will receive airfare, hotel, transportation and meals for the duration of the weekend – pretty sweet deal. All we ask is that you read the books and participate in the chats.SONY make.believe

Amazon: Stop Arbitrarily Removing Customer Reviews From Indie Author Books – sign a petition – “The next question is this: is there a Big Six conspiracy? Are the big publishers complaining to Amazon about the conduct of some Indie authors, those that game the system? It’s possible. I’ve seen the chatter. Of course, you won’t get either Amazon or any big publisher to admit to it.” Or so says the folks at The Masquerade Crew.

I have to say that I laughed out loud when I read that line. The idea that the Big 6 is actively paying for negative reviews to be left on indie books is so lacking in reason and analysis that the only response to give is laugh. Let’s look at this objectively, if we can. Amazon’s greatest tool against the Big 6 is its own source of content. I.e., the content produced by indies through Kindle Direct Publishing. KDP has convinced thousands of indie writers to give Amazon an exclusive by getting them to sign agreements to participate in the KDP Select. The Big 6 actively watch the indie list so that they can spend hundreds of thousands of dollars on what they hope to be the next big thing.

But simultaneously we are to believe that traditional publishing and Amazon are in cahoots to drive down indies? How about paying for positive reviews? I see only a bare minimum of reviews on many traditionally published books. Wouldn’t it make sense to actually pad the reviews of their own books instead of adding to the numbers that self published books have?

And is it any wonder that Amazon is deleting reviews of self published books that no one has heard of? Frex, Courtney Milan’s Unlocked, which was a top ten Kindle besteller and part of an Amazon direct email campaign has 105 reviews. If a self published author has even remotely close to her number and they aren’t in the top 10 ever? I’m giving that author the side eye and maybe Amazon is too.

There are things that indies can do to erode Amazon’s monopoly including not signing exclusive deals, making sure to actively sell their books at all available retailers, and promoting their sales within those alternative channels. The Masquerade Crew

→ Jane
Previous article: REVIEW: Yours for the Night by Samantha Hunter
Next Post: REVIEW: The You Know Who Girls: Freshman Year by Annameekee Hesik