Exclusive: Google readies its Spotify competitor with Universal and Sony now on board | The Verge – Today you should be hearing the news that Google is launching a streaming music service and has licensing deals with Warner Music Group, Universal Music Group and Sony Music. This will be an additional service to round out YouTube and Google Play.

When Google rolls out the new services tomorrow at I/O, it will mean that it gets the jump on Apple, which is also trying to launch a new streaming-music service. According to reports, Google’s subscription services would resemble Spotify, and offer on-demand songs that would be streamed to their PCs and mobile devices. In contrast, Apple is working on an online radio service that is said to be more akin to Pandora, the top webcaster. The Verge

Canadian writers’ union to make decision on self-published authors – The Writer’s Union of Canada (TWUC) is considering whether to allow self published authors join. The problem is that while some self published authors take publishing seriously there are many who believe that editorial input, from content to copy, is optional. For instance, over at Passive Voice, who reposted at length and hopefully with permission, one author’s discussion of how much it costs to self publish.

One line item was “editor” to which many comments said “pshaw.” Take, for instance, ABeth who wrote:

You know what? There are exceptions. Some people have great beta-readers who do that job. Some people can actually self-edit. Some people get both excellent beta-readers and can self-edit pretty darn well. So no, it’s not necessarily going to show. (And even when it does? Dalglish was probably making punctuation errors all the way to the bank. Hocking used her money to buy editing, if I recall the lore correctly.)

So yeah, the TWUC’s quandary is who to allow in and how to measure the quality of that author. My guess is that organizations will have to base it on a non subjective metric.  Money.  MobyLives

As a fairly private person I can tell you that I find this tremendously disturbing. In many states you aren’t allowed to record someone, either in person or on the telephone without permission. Laws will have to be revised to address these issues.

“But as with many digital innovations, there are inevitable concerns. In the consumer market, the heir apparent to Google Glass is contact lenses discreetly capable of filming and recording everything you see on-demand. Hands-free wearable cameras, like the Autographer from Oxford-based OMG, are also under development. Privacy regulators are hiding beneath their beds.”City AM 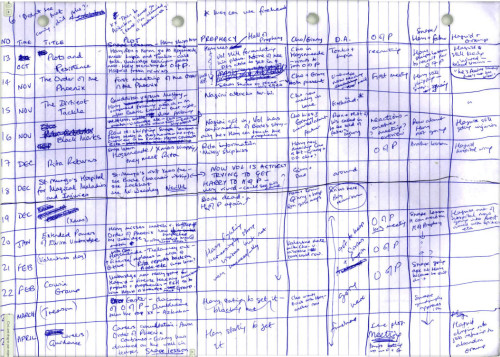 Famous Authors’ Handwritten Outlines for Great Works of Literature – Flavorwire has a collection of nine different authors’ outlines for famous works of literature from J.K. Rowling’s outline for Harry Potter and the Order of the Phoenix to Sylvia Plath’s for The Bell Jar. Pretty interesting stuff. Flavorwire