This is kind of a long story and I’ll try to reduce it into easy to consume paragraphs but stick with me.  A reader emailed me out of frustration arising out of a run in over at Amazon. She left a negative review for a book and so did another reader.  The reviewers started getting a massive amount of downvotes as soon as the bad reviews were posted.  The positive reviews were upvoted and there were several five star reviews by individuals who had reviewed nothing else but a small circle of self published books.

You can see exactly where this is going, right? 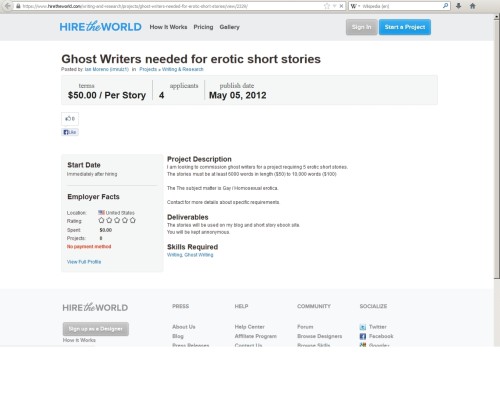 What does Moreno do with these stories? He “edits” them and repackages them under several different identities.  So far he’s connected with the following pennames:  Hadley Danes (non functioning website registered to RedGarnetMediaLLC), Bree Bellucci, Denise Avery, Haley Pearce (likely his first ghostwritten novel), Dara Bowman, Natalie Baird, and CR Lacerte. He also may write under Chelsea Kendall, Amanda Lawless.  These last two authors are connected to the others via one reviewer who has reviewed just Moreno’s books plus Sylvia Day’s Crossfire.   The other authors are published by the multiple LLCs he has formed including, but not limited to, Red Garnet Media LLC (Denise Avery, Bree Bellucci, Elyse Clair), Infinite Muse Press (Haley Pearce, Nora Weaving, Eva Fellheart), Roslyn House Publishing LLC, and Yuppie Bitch (Hadley Danes, Natalie Baird). Yuppie Bitch is the new name for Roslyn House Publishing LLC. He’s not always careful when identifying who the author and publisher is.

Mr. Moreno bragged about his publishing success on the forums at a video game forum (Screenshot here).  Moreno claims to have over 130 “books”in his catalog.  He has 120 novellas and ten books. To one author, he has paid $7000 for her books.  On Something Awful forum (account registration required & annoying video plays so turn down your speakers), he boasted of making $80,000 a month off his ghostwritten work.

Moreno notes in a follow up that short stories and novellas aren’t paying off so he’s moved on to full length novels with a greater upfront cost but higher payoff.  Given that he’s cracked the top 100 with at least two books, it’s fairly easy to pinpoint where he’s making his $80K a month from.

He’s no different than a publishing house, right? Well, except for passing himself off as an author and creating sock puppet accounts to review and upvote his own books. (Hey, Amazon how’s that algorithm working for you where you aren’t supposed to let another author review books connected to her own?)  Book Lovers Escape reviewer, like Ria Adams,  has only reviewed the Moreno books. And s/he has changed her identity more than once from Kimberly Roarke.  There are other sockpuppet accounts associated with his name, although the full extent of the fake identities he’s created is unknown. 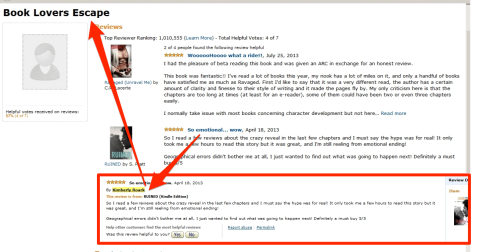 Mr. Moreno is using these sock puppet accounts to give marginal reviews to competitors. One review was left on Cora Hawke’s book but has since been deleted.  Moreno has a couple of rock star books to his name (including the NA book by Hadley Danes) and Cora Hawk has written a successful and popular rock star series.  Moreno’s latest incarnation is as a New Adult author, C.R. Lacerte.  The publisher for Lacerte is Steyr & Hawthorne.  The address of the publishing company matches up with Moreno’s address in the business listings (which I’m not linking to or showing you the screenshot for obvious reasons).

Is this all original content from the ghostwriters? I don’t know but we do know that in the past ghostwritten work has often been plagiarized both in the case of David Gemmell and, more recently, in the cases of Tammara Webber and Jamie McGuire. But Moreno’s tactics have been successful. Some of his rockstar books and new adult books have purportedly been in the Kindle top 100.

This is not unlike the Stephen Leather story where he admitted that he created dozens of sock puppet accounts to upvote his own books and downvote his competitors. But unlike Leather, Moreno is also posing as several authors rather than being forthcoming that they are ghostwritten and that he is nothing more than a publisher of work for hire.  I suspect that Moreno, a self described internet marketer, recognizes that putting himself forth as an author is a much better marketing technique than putting himself as a publisher of work for hire stories. I also suspect that given the constant rebranding and changing of identities, Moreno knows that something isn’t quite right with what he is attempting (and succeeding) at doing.

Whether this is a deal for his authors is between him and his business partners, but the perpetuation of these separate identities and unsavory review techniques is something worth talking about.

A New Report Calls for the End of Geo-Restrictions, More Price Competition for eBooks in Australia – A report from the Australian government is recommending a number of consumer oriented solutions for the very high prices of tech products and services. Australian (and New Zealand) readers pay exorbitant prices for books and other items. The report recommends everything from teaching Australians to get around geographic restrictions (do those include renting an US postal address?) to allowing consumers to resell digital content.

You can read more at Nate’s site. The conclusion? Hollywood et al will just not license any content to Australia which would mean that Australia would become the biggest torrenting location anywhere. The Digital Reader