This May Be The Best Response To A Facebook Rant — Period. – An internet troll or comedian or someone named Richard Neill posted a facebook rant about how a Maxipad company lied to him in commercials about a woman’s joyous adventuresome spirit that she adopted during her period. The company created possibly the best response ad I’ve seen yet to so called negative internet feedback:Mashable

Microsoft Surface pricing criticism: $500 too high without Touch Cover – Microsoft Surface was announced this summer, but for a while it felt like vaporware with no release date on the horizon. MS has now announced release date of October 26, 2012. The Surface comes in three different flavors from 32 GB at $499 to 64 GB at $699. (http://surface.microsoftstore.com/store/msstore/Content/pbpage.Surface?ESICaching=off&WT.mc_id=MSCOM_EN_US_HP_FEATURE_132F1ENUS31157) Now Surface does come with a functional USB port which means you can easily transfer or add items from a USB memory stick and a microSD slot, but critics are saying that the MS tablet is overpriced because in order to make it really useable you need the keyboard which costs an extra $100. What concerns me is that I’ve bought any number of iPad Apps. Am I ready for a new platform and a new set of apps? I don’t know. GBR and Microsoft

Textbook Publisher Pearson Takes Down 1.5 Million Teacher And Student Blogs With A Single DMCA Notice – This is an incredible misuse of the DMCA notice and it is not entirely Penguin’s fault. It’s the fault of the hosting company, ServerBeach, who took down all of the blogs in order to address one minor complaint. A teacher posted a copyrighted 20 question test published in 1974 on a blog in 2007. For some reason, this post caught the attention of Pearson who sent out a DMCA warning. The ServerBeach folks responded by taking the entire 1.5 million blogs off line. Techdirt 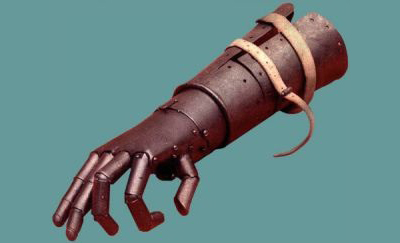 This amazing prosthetic hand was made in the 1500s – Meljean Brook’s book “Riveted” is about a man in alternate Victorian timeperiod with prosthetics. But her story isn’t that unbelievable because prosthetics were being developed back in the 1500s. Ambroise Paréwas a royal surgeon but his heart belonged to the soldiers. When he discovered that some soldiers would rather take their own lives than live with amputations, he began to create artificial limbs. (http://io9.com/5946835/this-amazing-prosthetic-hand-was-made-in-the-1500s) Gotz von Berlichingen was a soldier who had three hand prosthetics that had spring operated fingers. i09