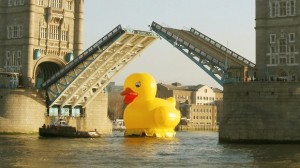 Tower Bridge forced to open for 50 foot rubber duck | London – ITV News – Jackpotjoy.com was responsible for sending a giant rubber duck down the Thames, forcing the Tower Bridge to open in order to allow the duck to pass. Jackpotjoy is a gambling site and its “Facebook Fundation” is “a bursary granting funds and rewards for daft ideas to encourage Brits to have more fun.” ITV

Why are novelists turning to co-authors? – British author Wilbur Smith appears to be shocking the establishment by revealing that his six book deal with HarperColins worth around £15m will be co written by other authors ala James Patterson. Smith will come up with the ideas and the co authors will execute them (write the books). Smith says he is doing this in order to satisfy fan appetite for more books. However utilising co-authors is not a new concept. “The notion of having others to produce books has been going on for centuries,” says Anna Davis, a literary agent with Curtis Brown. “The Three Musketeers author Alexander Dumas did it – he had a whole team of authors writing for him all the time. He’d plot things out and have other people do the donkey work.” BBC News

This and others are the basis for Apple’s suit against Samsung, a suit it won at the trial court. Experts say that the patents deemed invalid at this point can go on to win approval but even the USPTO making this step is important. Foss Patents

The 5 Most Persuasive Words in the English Language – Gregory Ciotti at Copyblogger argues that the five most persuasive words are You, Free, Because, instantly, and New. Therefore you should visit the free site called Dear Author because you will instantly gain new information that will enable you to function better each day. Convinced? Copyblogger

→ Jane
Previous article: REVIEW: When Maidens Mourn by C.S. Harris
Next Post: REVIEW: Love in the Afternoon by Alison Packard