Adults Up, Kids Down in January – For a few years, YA was getting insane money. Six figure deals were the norm rather than the exception and why not? Twilight and then the Hunger Games and to a lesser extent books like Vampire Academy held adult and YA readers in thrall. B&N even created a teen paranormal section. At BEA, YA books were everywhere but sales of YA books are actually falling and not growing. In January, adult sales were up by 8.4% but the children’s and YA fell 23.5%. eBooks declined 36.2% in the YA market and 29.3% in the hardcover m YA market. YA sales appear to have been down (albeit only slightly) ever since September. Mass markets were down 2.9%. Publishers Weekly

Copyright Law on the Internet Is a Total Train Wreck Right Now – Hubspot discusses why internet copyright law needs to be reformed to account for individuals who are content sharing without intention of copyright infringement. I think the idea that Pamela Vaughan is getting at in her blogpost is that perhaps there should be a DMCA safe harbor provision that allows you, the potential infringer, to remove the infringing photo or content on your site without facing an immediate fine and/or penalty.

Copyright reform is necessary and like Pamela, I’m not sure what the answers are. It would be great to get a large group of people in a room with various points of view and interests to hash out what would be a workable framework that would both protect individual content creators yet avoid imposing such huge fines that relatively innocent content sharers have the opportunity to remedy the wrong without being pushed off the internet. Hubspot

Dr. Seuss, the Mad Hatter: A Peek Inside His Secret Closet – Clearly this is why publishing doesn’t work as well as it used to. When Dr. Seuss wrote his books, his editor came to hang out at his house and then when Seuss got writer’s block, they would go into a secret closet where Seuss had thousands of hats and then try them on until he began inspired again (or smoked a bunch of weed. Thing 1 and Thing 2?)

When the late author, the alter ego of Theodor Seuss Geisel, was penning his beloved Beginner Books for Random House in the 1960s, he’d have his editor in chief, Michael Frith, over to his house, where they’d work until the wee hours. And when they’d get stuck, according to “Dr. Seuss & Mr. Geisel” by Judith and Neil Morgan, Geisel would open a secret door to a closet filled with hundreds of hats. Then, he and Frith would each pick a different hat, perhaps a fez, or a sombrero, or maybe an authentic Baroque Czech helmet or a plastic toy viking helmet with horns. They’d sit on the floor and stare at each other in these until the right words came to them.”Collectors Weekly 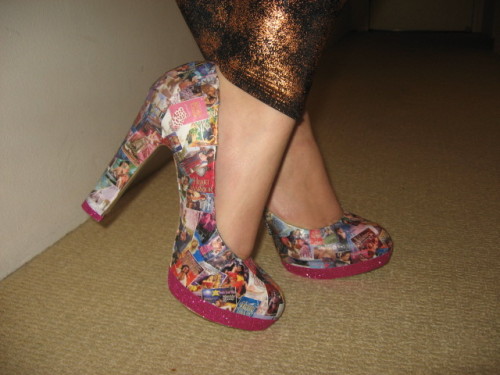 The Most Awesome Shoes in the Universe  – One of Sarah Wendell’s readers sent her photos of a pair of platform heels that are so awesome I want to raid this girl’s house. Head over to Sarah’s blog for information on how these magnificent shoes were put together.

I’ve spent the past couple of weeks working on a visual art piece that celebrates my love of romance novels. My work is pair of high heels that have been decoupaged with romance novel covers (both old skool and recent releases). They are entirely functional and I have plans to wear them … pretty much everywhere . Essentially, they were for an assignment and will be in a small exhibition/showing that was organised by my tutorial tomorrow night (part of the assignment criteria included distributing the work) but I’d actually rather share them with romance readers because I know they’d have a deeper appreciation for them. And did I mention the title of the work? I’ve called them “The Sole of a Romantic”.