Dear Author has an Advanced Search function. You can search by Reviewer, Grade, Category, Keyword, Author, and Title. I hope you love it.

Amazon.com Announces Fourth Quarter Sales up 22% to $21.27 Billion – Amazon releases information regarding its fourth quarter. It saw 56% increase in operating income and a net sales increase of 22%. But net income decreased 45%. Physical book sales were the lowest they’ve been in December. 23 KDP authors each sold over 250,000 copies of their books in 2012, and that over 500 KDP Select books have reached the top 100 Kindle best seller lists around the world.

Financial analysts say that this information merely shows that Amazon’s margins are getting tinier.Amazon 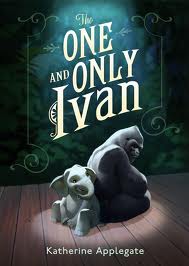 Welcome to the Newbery Medal Home Page! – On Monday, the American Library Association handed out its prestigious YA and Children’s book awards. The winner of the Newbury Award for 2013 is The One and Only Ivan by Katherine Applegate. ( A | BN | K | S ) I just finished reading this last month to the tot and it is a really fantastic book. I highly recommend it for all ages, particularly if you want to read a book wherein the first person present tense is used effectively.

Ivan is a silverback gorilla who lives in a shoddy mall zoo. His best friend, Stella, an elephant dies while she is in captivity with him. Before she dies, she makes him promise to save Ruby, the baby elephant bought to revive the prospects of the owner of the mall. Ivan’s voice is understated (as opposed to exaggerated) allowing the reader to fill in the emotional swells. But even more amazing was the consistent way in which Applegate uses Ivan’s perspective to describe the things he sees or experiences:

“She makes a happy, lilting sound, an elephant lie. It’s like the song of a bird I recall from long ago, a tiny yellow bird with a voice like dancing water.”

“The humans stop eating their popcorn. They coo. They clap. Ruby is a hit. I don’t know whether to be happy or sad.”

If you don’t feel right about reading this by yourself as an adult, grab a kid and read it to them.  Association for Library Service to Children (ALSC)

Retailers may add surcharge in credit card transactions | Reuters – A group of merchants sued major credit card companies arguing that these companies conspired to fix fees that stores pay to process credit card transactions. As a result of this settlement, the merchants will be allowed to charge customers a fee equal to the cost of accepting the card, anywhere from 1.5 percent up to 4 percent. The avoid the surcharge, pay with cash or a debit card. Online, you will want to use Paypal or other cash oriented transaction. Reuters

Cats killing billions of animals in the US – I once had a cat that tried to kill all my visitors by trying to trip them at the top of the stairs. RIP Hannibal (named because he bit Ned’s eye when we first got him). Apparently Hannibal was just acting in the way of his tribe. One study suggests that cats are on of the biggest threats to animals, killing billions of birds and other mammals annually. A properly fitted collar and bell would reduce the threat to mammals by a third. BBC News

→ Jane
Previous article: Daily Deals: A couple self published gems & a political tell all
Next Post: REVIEW: Wait Until Dark by M.L. Buchman