Wednesday Midday Links: What kind of author promotion works for you? 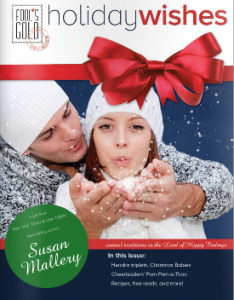 Susan Mallery is an author whose promotional work intrigues me. My responses to her novels have been all over the place from loathe to love but, for the most part, I find her promotional voice works, in part because I never get the sense that she is selling me anything even though that is probably untrue. I follow Mallery on Twitter because she is an avid Project Runway fan. She tweets about who she likes and doesn’t like on PR. She allows herself to express an opinion and it makes her more relatable (at least to me).

I also follow Teresa Medeiros on Twitter and she ended up writing a book about two people who fall in love on Twitter and I found the whole book unbearably twee. I will be posting a review on it at the end of the month when the book releases, but suffice to say that this is one book that was probably far better in concept.

Instead of doing the book trailer, Mallery has created these online magazines that feature articles about her characters. The first one was a wedding magazine that had a pictoral layout of the wedding of former champion cyclist and Fool’s Gold city planner. The most recent one is about Fool’s Gold, the city. It’s a Holiday magazine and part of the advertisements feature bloggers and other websites (we did not pay to advertise, it’s kind of an Easter egg of sorts).

The view stats for the magazine indicate that other people are enjoying the magazine as well. The Holiday magazine has been viewed 82,069 times. Compare those stats with the book trailer done by Circle of Seven for Christina Dodd, a bestselling author like Mallery. The book trailer has 6,339 views and was uploaded over a year ago.

One thing I don’t like about the Mallery promotion is that there is no good way to embed the magazine. It’s really best viewed at the hosting site.

Another example of an author promotion that I really liked was the audiobook widget for the upcoming Susan Elizabeth Phillips. I generally disfavor widgets because they don’t really offer anything useful and seem more advertisement and less a benefit for me as a reader or blogger, but I liked this audio widget because you can play the audio sample right from the widget itself. no click throughs or anything. (As an aside, I enjoyed this book quite a bit and we have a couple of reviews, both positive, but with very different thoughts from Jennie and Robin to be published next month).

Twitter sells books according to some publishers. The publicity director for Algonquin shares his ideas as to why Twitter is becoming an effective medium for them:

The trick to their success may lie in the community building which is so crucial to Twitter. Taeckens explains his three point plan for engagement: “First, be pro-active about interacting with other people; you have to engage in conversations, not merely post as if you’re reporting to a captive public. Second, display your sense of personality; use wit, humor, creativity, and have fun. Third, post and comment on topics you know and care about–not just literature and publishing, but all topics in the cultural dialogue.”

I’m a big tweeter and one thing that I really dislike and that I am seeing more of is what I like to call “the circle jerk of promotion”. This happens when a group of author friends retweet or repost one of the group’s new release so all you have in your entire feed is a bunch of authors retweeting the same thing about Author A’s book being out. It becomes total white noise. If you want to tweet about the release, can’t you come up with something new and innovate to say about your friend’s book?

I could write all day about the horrible websites out there and it seems like Karen Marie Moning’s relaunched website breaks all the rules. First, it is run on flash. Flash, as you may have read, cannot be viewed on any iThing. So that is like 80 million devices that can’t view whatever it is the author spent so much money to have on her site. Plus, it takes time to load and people with slower internet connections are likely clicking away. Further, many people visit during work hours and can’t even see or enjoy the fancy shmancy thing. Beyond the flash is the audio that starts up when the site loads, with a voice over by some guy (who I have since found out is her husband?) I think he is supposed to sound seductive, but the extra breathing at the end of his words and the indecision as to whether he should be singing or simply narrating the text made it sound funny. The background track was annoying. I eventually turned it off so I don’t know the whole soliloquy given by the narrator (and isn’t this whole series about a chick and not a guy anyway?). Then I thought, maybe this site is just for her fans because after all she is celebrating the release of the fifth and final book in her series. Maybe it’s not to bring in new fans at all.

Borders has a really ugly, high priced something on its site that is designed just to display recipes.

Nate over at the digital reader points to the results of a new survey regarding publishers and ebooks. Over 62% of publishers don’t know what the ROI on ebooks are yet. I think the downfall of pricing right now is that as the ebook industry grows rapidly so does ebook revenue because new entrants are buying books. The question is how much greater could growth be. Ebooks are currently viewed as additive sales versus replacement sales even though sales of books like mass markets are declining by double digits.

All About Romance has published its top 100 list which is voted on by the readers of AAR. Number one is Lord of Scoundrels by Loretta Chase. Big names and historicals seem to dominate the list.

The Roses of Prose are looking for another blogger to join our group of four authors. If you’re a published author – traditional, e-published, or self-published, and would like to blog with them, check out the guidelines on their site http://www.rosesofprose.blogspot.com/.