Sometimes I forget what news pieces I’ve posted here so if I have posted this, please forgive my lapse in memory.  Tech Crunch has actual details of the new Amazon Tablet. It’s 7″ and supports two finger multi touch gestures (instead of the 10 finger supported by the iThings).

****
The Times has an article about the decline of mass markets something we’ve discussed on DA a number of times. Retail shelves are being devoted to higher value products like the trade paperback and the hardcover.  Walmart is doing something similar. I was told that Walmart is also reducing the size of the romance department to include more children’s titles that had been stocked in the toys section previously.   Mass market sales are primarily derived from supermarket, drugstores, and big box stores like Walmart.  I believe that the mass market will likely disappear from our book ecosystem replaced largely with ebooks.  Physical stores will focus on selling trades and hardcovers as there is a greater profit margin there.  Mass market books may see a reintroduction via new forms like the dwarsligger which I noticed  back in 2009.  A reader from the Netherlands kindly purchased one for me and sent it to me. It’s actually much nicer than I thought it would be.  Opened fully, it presents about one page in full and is printed on thin paper – much like the paper many Bibles are printed on. 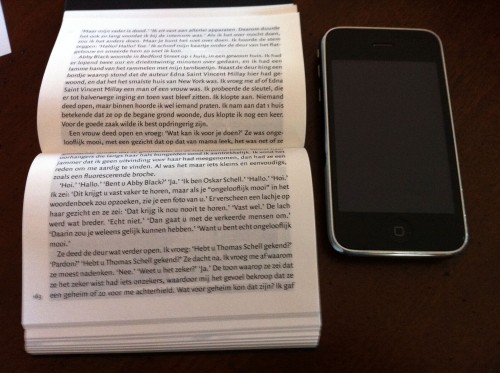 ****
Mills & Boon India books will be available in digital form by the end of the year. I hope that this means that we non Indian residents will be able to purchase those books.

I’m not certain how much of HMBI is original content from the Indian arm or how much is regular Mills & Boon stuff published in India.  At least it will be interesting to see what titles are being sold there.
****
According to The Millions, a number of literary authors are shifting to writing genre fiction. Is it because of the money (yes, my cynical side says) or because of the creative freedom?  Mostly because of the money.  The author may have a hard time making a living writing solely literary fiction or the publisher may brand a title genre fiction in order to appeal to a more mainstream audience.

Still, it’s hard to think of very many writers – save possibly Stephen King – who have moved from genre to literary. The floor seems to slope the other way, and Patriarche concedes that sometimes the difference isn’t so much in what the author has written as in how the publisher opts to describe it. “I’ve seen literary books blurbed as something like ‘the thinking woman’s beach read,’” she says. “And that’s a sign that the publisher is trying to appeal to consumers who are more mainstream. In this aspect the change is more industry-driven than author-driven.”

*****
Apparently the psychological affect of fiction is a hot research topic.  The latest paper is published by researchers at the University of Buffalo and the paper suggests that reading fiction can make someone more empathetic.

And “belonging” to these fictional communities actually provided the same mood and life satisfaction people get from affiliations with real-life groups. “The current research suggests that books give readers more than an opportunity to tune out and submerge themselves in fantasy worlds. Books provide the opportunity for social connection and the blissful calm that comes from becoming a part of something larger than oneself for a precious, fleeting moment,” Gabriel and Young write.

While this article focuses largely on the positive aspect of fiction reading it is easy to see how this is turned against the reader as well.