Updated: Amazon just announced that AT&T is sponsoring its Kindle with 3G (and I don’t know for how long) so that the price of the Kindle 3G with special offers is now $139. Even without a touch screen, I think this is the best ereader on the market. The 3G makes it so easy to get books on your device. All you have to do is mail them to your Kindle address. Don’t forget to use the free.kindle.com instead of kindle.com so you don’t pay for any document charges.

In a post analyzing recent magazine circulation figures, WWD Media revealed that Vanity Fair‘sJustin Bieber cover story tanked at the newsstand. Despite Bieber’s 10 million Twitter followers, his issue could be the worst selling edition of the magazine in 12 years.

Despite this showing by Bieber (and frankly Vanity Fair readership is not the Bieber audience), I’ve been told by publishing insiders that celebrity memoirs are the closest thing to a sure bet these days.  A quick look over the NYTimes non fiction bestseller list and you can see why celebrities are pursued with vigor: Tina Fey, Anne Coulter, Tim Tebow, Chelsea Handler, Steven Tyler.  Snooki, the person on Jersey Shore who is famous…for being on Jersey Shore? has signed a deal to write the sequel to A Shore Thing.

Kobo is signing some major agreements.  First, it has a terminal in Grand Central Station.  I actually love this. I wonder if this will lead to kiosks in malls? The kiosk will be staffed with Kobo experts: 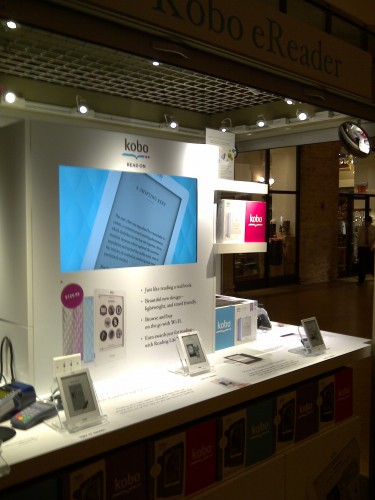 Kobo also announced the launch of its German store:

Canadian upstart Kobo, which is currently well behind the e-book leaders in the U.S., has always had a global strategy, and is now launching in Germany, with an e-bookstore that offers 80,000 German language titles and a total of 2.4 million eBooks. By contrast, Amazon currently offers around 25,000 German-language titles.

If you are a George RR Martin fan, you might be frustrated (or elated) to hear that Martin is likely to write three more books in the series as more plots and characters have been added in the previous two books, making it difficult for Martin to wrap up as he had originally planned. Actually, according to the Atlantic interview, Martin intended this to be a trilogy (which is why the first three books are awesome and the next two are messes).  Also frustrating? Martin doesn’t plan to start book 6 until next year.  I have to say I feel better everyday about cutting the Martin cord after book 3.

Jia is slaving over A Dance with Dragons and I suspect we’ll have a review up at some point in the next few weeks. (No pressure, Jia!)

Ellora’s Cave is loosening up its restrictions on subject matter in its books:

In an effort to stay with the times and to allow your stories to reflect modern sexuality and/or sexual fantasies, I am loosening up on the taboos listed under “submission guidelines,” which can be found at http://www.jasminejade.com/docs/AuthorInfo.pdf

1) I stand firm on the following: NO necrophilia, bestiality, pedophilia, or weapons stuffed up various parts of the female anatomy.

2) golden showers are now permissible in the kink, m/m and exotika lines ONLY. SCAT is still forbidden.

Really? The people who aren’t bothered by golden showers would be bothered by SCAT?  I wonder if EC is hurting for submissions.  Some of the new release pages are peppered with older books.  These older books aren’t designated as older releases but you can tell when you click on the excerpt and see the copyright date.  EC announced today that Laurann Dohner signed a 75 book deal with them.  75.  O_o.

A historical fan?  You might like this new community.  A  half-dozen Regency authors are starting a new group blog: http://www.theballroomblog.com  and it launches tomorrow, the 14th.  The authors involved include Tessa Dare, Sarah MacLean, Gaelen Foley, Miranda Neville, Katharine Ashe, and Sabrina Darby.  They’ll have regular posts three times a week, and most posts will be dialogue, like snippets of conversation overheard in a Regency ballroom. For example, author-to-author, author-to-character, Lady B (the fictional hostess)-to-whomever she pleases.  The Ballroom will be light, fun and reader-focused.