From the Press Release:

TOKYO and TORONTO, November 8/9, 2011 — Rakuten, Inc. (JASDAQ: 4755) and Kobo Inc. today announced that they have entered into a definitive agreement under which Rakuten intends to acquire 100% of total issued and outstanding shares of Kobo for US$315 million in cash.

Kobo was founded by and spun out of Indigo, the largest book, gift and specialty toy retailer in Canada, in December, 2009. Since that time, Kobo has become a fierce competitor in the eBook marketplace, with a family of innovative eReaders, a wide range of eReading apps, one of the largest eBook catalogues, an innovative social platform and retail partners around the globe.

The acquisition marks a major step forward for Rakuten, one of the world’s top 3 e-commerce companies by revenue, as it continues to expand its unique B2B2C borderless e-commerce business globally, by adding an ecosystem to provide downloadable media products to consumers, starting with eBooks.

Hiroshi Mikitani, Chairman and CEO of Rakuten, commented on the acquisition, “We are very excited about this next step. Kobo provides one of the world’s most communal eBook reading experiences with its innovative integration of social media, such as Facebook and Twitter; while Rakuten offers Kobo unparalleled opportunities to extend its reach through some of the world’s largest regional e-commerce companies, including Buy.com in the US, Tradoria in Germany, Rakuten Brazil, Rakuten Taiwan, Lekutian in China, TARAD in Thailand, and Rakuten Belanja Online in Indonesia, and of course, Rakuten Ichiba in Japan.”

“From a business and cultural perspective this is a perfect match,” commented Kobo CEO Michael Serbinis. “We share a common vision of creating a content experience that is both global and social. Rakuten is already one of the world’s largest e-commerce platforms, while Kobo is the most social eBook service on the market and one of the world’s largest eBook stores with over 2.5 million titles. This transaction will greatly strengthen our position in our current markets and allow us to diversify quickly into other countries and e-commerce categories.”

Upon closing the acquisition, Kobo will continue to maintain its headquarters, management team and employees based in Toronto, Ontario.

The global eBook market is one of the fastest growing segments of the consumer technology industry, with a compound annual growth rate of 36% through 2015*. The global content market size is also expected to grow dramatically to reach approximately US$10.6 billion per year by 2015 (estimates exclude China).

Rakuten owns Buy.com and also runs Barnes&Noble’s Affiliate program through LinkShare. (BN also has an affiliate program through Google Affiliates which has earned the blog about $30 in the year that I have been using it which probably suggests I am using it wrong.)  Rakuten is about the size of Amazon and thus brings more money to the table than Indigo and Kobo could have.  Let’s hope that the acquisition by Rakuten finally improves the customer service.  Brian emailed me that his Kobo Vox turned up but mine, well, mine is still lost in the ether. I’ve tried to cancel my order and received no response to that either.

A reader at a James Bond forum noticed some similarities between a debut novel called Assassin of Secrets by Q.R. Markham.  This was blurbed by two well known authors and received starred reviews from PW and Kirkus.  On the Bond message board, a AMC Hornet started it off:

Not anyone who knows their Gardner:

Brewster was a big man, tall, broad, bearded, with an expansive personality—a big bearded bastard,” Brewster’s secretary and mistress, the petite, blond Tabitha Peters, was often heard to remark. Not the usual kind of person who made it to a responsible position in the clandestine services. They tended to prefer what were commonly called “invisible men”—ordinary, gray people who could vanish into a crowd like illusionists.

Compare that to the first paragraph of Chapter 5 from Nobody Lives For Ever.

If you want a copy of this book you’d better order one quickly, before it’s pulled from distribution by IFP.

This started off an investigation which revealed that Markham had plagiarised pages and pages of content.  Ed Champion lays out numerous instances of copying up to page 27 but also notes that Markham has plagiarised several other pieces.  The US and UK publisher have both pulled the book.   There is no plagiarist safe on the internet, folks.  Some reader, some where will notice.

L A Times has a piece about book trailers indicating that some publishers like St. Martin’s Press are paying upwards near $50,000 to produce a book trailer for its top tier authors.  One of my followers on Twitter noted that this might be smart if it was placed at the beginning of a Breaking Dawn movie, but instead the trailers languish on YouTube.

Other publishers like Harlequin and Walker Books are experimenting with enhanced covers. While the following cover is cool, it is flashbased unlike Harlequin’s which is a gif.  The other problem is that the Daylight Saving cover widget doesn’t lead you anywhere.

Mobile Flash has even been killed off by Adobe due to the fact, probably, that hundred million iThing devices won’t run mobile flash.

BISG says that readers love their ebooks and more and more once they go e, they don’t want to read print.  From the study:

*****
If you have a few million dollars just burning a hole in your wallet and a yen to live in Ireland, this fantasy home might be just the thing for you. 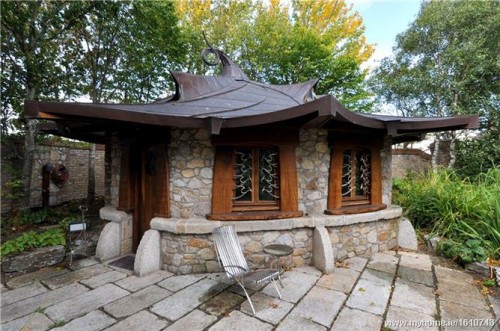 According to an article in Irish Times:

IF SIX-YEAR OLD boys were in the market to buy properties, their home of choice would be Harlech House, a fantasy build that is part Tim Burton, part Game of Thrones with much of the Brothers Grimm canon thrown in for good measure.

→ Jane
Previous article: REVIEW: All They Need by Sarah Mayberry
Next Post: REVIEW: The Famous Heroine by Mary Balogh