One thing that is rarely mentioned on this blog and I feel badly for it is the negative attitude some publishers have toward libraries, particularly when it comes to digital lending.   Sarah Wendell asked Brian Napack of Macmillan why the Macmillan books aren’t available to libraries in digital form. Napack replied that they are working on a business model that makes sense to them.   What does this mean? Apparently publishers believe that the library patron is not a book buyer.   I am not sure where publishers get this idea as it is well known that publishers don’t view readers as their customers and thus have very little data on consumer spending habits.

The one nugget that really resonated with me is that Amazon is selling most ebooks at cost or less (does this include Agency books that are priced “at cost”).   When I was pulling up links for a review yesterday, I noticed that BN.com had web ads for other companies: 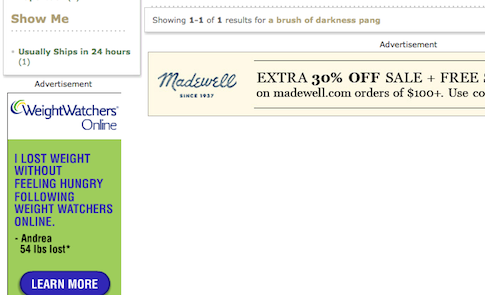 Amazon has no similar advertising. The reason is that Amazon wants to become a fulfillment center for every purchase you make.   Amazon will be expanding AmazonTote which brings grocery shopping to your door. I know other urban centers already have this feature through other providers, but my smaller urban center does not.   There are no fees of any kind (does this mean that Prime is going to be phased out?) The terms are this: buy anything you want up to 50 lbs and up to twice a week, it will be delivered to your door in a weather resistant bag.   You leave the bag on your doorstep with any item you want returned for free.

The idea here is that Amazon is using Kindle and Kindle books to gain readers who obviously have other needs.   Amazon’s apparent promise will be that anything you could ever imagine can be delivered to your doorstep, whether it is digital books and digital movies or a five pound bag of flour and a box of diapers. Right now, it looks like the books are loss leaders.   Amazon doesn’t ever want you to leave its site. Everything you want can be purchased there.

I forgot to mention that I am sponsoring a Goodreads giveaway of 15 copies of Thea Harrison’s Dragon Bound, a May paranormal romance that I think readers will really enjoy.

See the giveaway details
at Goodreads.

We’ll be giving away copies on Dear Author later in February for those who aren’t and don’t want to be goodreads users.

Ursula LeGuin blogs about how she may be too immoral for the HarperCollins given its morality clause.   I appreciated this comment:

This is quite strange! Since when does falling into public contempt and thereby garnering media attention contribute to declining book sales?

Too true.   How do these celebrities pass muster?   Aren’t they a byword for immorality?

Karen Scott posted to a link to an “epic ranty review” of Sarah Mayberry’s Amorous Liasons which pointed out that everything that Mayberry could have written incorrectly about ballet dancers, she did.   In February, I’m going to post a piece entitled “When has accuracy ever ruined anything?”   I think you can guess which side of the fence I am on. I understand where a reader, like Karen, will say this didn’t bother me because I don’t know jack squat about ballet.   Essentially Karen is saying “is accuracy important in romances?”   I don’t think that is the right question.   To me, the right question is, would Amorous Liasons been a worse book if Mayberry had been more accurate in her depiction of the heroine’s dancing profession?

→ Jane
Previous article: REVIEW: How I Learned to Love the Walrus by Beth Orsoff
Next Post: REVIEW: Archangel’s Consort by Nalini Singh