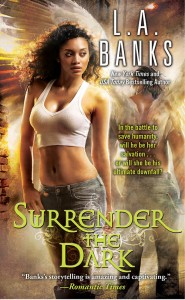 Yesterday the sad news came out that LA Banks lost her battle with cancer and has passed on. Sarah Wendell is headed to a celebration of Leslie’s life in Philadelphia. Join her and others to celebrate Leslie’s personal and professional contributions.

Shifty Jelly posts that it is removing itself from the App Store because Amazon is a crappy business partner. ShiftyJelly complains that while its initial terms indicated that if Amazon choose to give away the product for free, the developer would still get 20% of the asking price. However, Amazon offered the Free App of the Day space to ShiftyJelly only with the provision that the developer would be paid nothing. ShiftyJelly agreed to these terms and over 100,000 apps were downloaded.

What actually interests me about this story isn’t that ShiftyJelly feels like it got shafted. They didn’t. They choose to participate in a promotion that gave away their product for free. What is interesting is the low number of downloads (only 100,000) and the fact that the product didn’t generate any significant sales after the promotion.

Dan Lubart, Principal, Iobyte Solutions has offered another analysis of book sales and the Amazon store. The goal of promotional pricing should be to increase a title’s visibility and in Amazon’s case, pushing the title onto the top 100. According to Lubart, HarperCollins achieved that with nine of its titles. My guess is that the HC titles were $1.99 and under.

Another author signed with Thomas & Mercer, Amazon’s mystery imprint. I think Amazon has a better handle on what is selling in the mystery imprint if the titles, covers, and blurbs of the Montlake books are anything to go buy.

Speaking of foreign markets, apparently Macmillan has been doing bad stuff overseas. According to this Wall Street Journal article, Macmillan’s UK branch was accused of participating in bribery in order to secure educational contracts in Africa.

The company said it’s agreed to pay a fine of GBP11.2 million levied by the Serious Fraud Office over illegal payments made by its education division to secure contracts in East and West Africa.

Another school related publishing scandal, Scholastic has decided to reduce the corporate sponsorship of books that it pushes into schools:

Two months after Scholastic, the world’s largest publisher of children’s books, was hit with a barrage of criticism for distributing an unbalanced curriculum sponsored by the coal industry, the company is cutting back its InSchool marketing division’s corporate-sponsored projects, and creating a new review board to vet its materials.

Digital sales are about 14% of Penguin’s business worldwide. At Simon & Schuster (aka Pocket), digital sales have doubled but have not offset the decline in print sales.

*****
I’m opening up the 2012 advertising. I have one slot in August available. If you are interested in rates and terms, email ads at dearauthor.com