Do you ever wonder where the year went? Me too. It’s hard to believe that tomorrow begins the last month of 2011. I would love to post some reader reminiscences about their 2011 year of reading. What they loved. What they hated. How they’ve seen the genre evolve, either for good or ill. If you have something to say, send it to me jane @ dearauthor.com.

LA Times takes a look at other tablets in the $199 range and unfortunately there isn’t a really good alternative at this point to the Kindle Fire or the Nook Tablet. Either the screens have lower quality or there isn’t as much processing speed. I was sent a Velocity Cruz for review and while the lower resolution screen didn’t perturb me too much, the inability to stream video content did.

O’Reilly urges publishers to sell direct to the public. My biggest problem with publishers right now isn’t their death match moves against Amazon but their unwillingness to step up to the plate and offer a decent alternative. The biggest move to check Amazon, as Charles Stross says (and we have argued), is to remove DRM. While the readers might still buy a Kindle, they can shop around if you make it easy for them to do so.

Kevin Bolk redrew the Avengers promotional poster to highlight sexism in the comic culture and, more broadly, the entertainment industry. In the actual promotional poster, everyone of the Avengers faces forward in a powerful stance. Oh, except for the chick who is turned so that her back arches and her bootyliciousness is stuck out for all the wankers to enjoy. The second is obviously turning the poster in its head. Or rear, as the case may be. 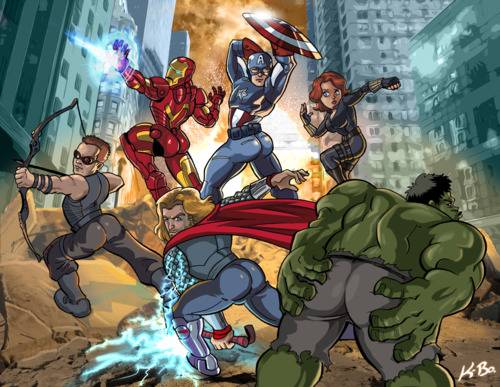 A reader sent me a link to a book being sold on Amazon by Linda McNabb. She is offering her book for $.99 or the DRM Free version for $2.99. What do you think readers?

Are you noticing incredibly high prices on backlist titles that are suddenly reappearing?  I presume that it is done for two reasons. 1) publishers are attempting to prevent rights reversions by making the books “available” (older contracts, I am told, may not have a specific dollar floor) and 2) using Print on Demand to source the books’ availability.

We actually discussed this on Dear Author in 2007.  How the world changes and doesn’t. In 2007, I referenced Connie Brockway’s inability to write about Lord Strand but now it sounds like that book will be forthcoming via Amazon Montlake in 2012.  But authors like Linda Hilton are getting the shaft because her book is $22 and doesn’t even have a cover and in one case, only has her last name on the graphic image posing as the cover.

I believe that nearly every big publisher has turned to POD for their backlist books.

Jeremy Dun has become a crusader against plagiarism.  Dun is a well known author of thriller fiction.  He was asked to blurb a book and gave a glowing one.  After the book was published, it quickly became clear that the book was heavily plagiarized.  This has led Dun to seek out other instances of plagiarism and it appears to be reaching into some of the highest echelons of publishing.  The latest alleged perpetrator is Patricia Waddell who has reportedly taken passages directly from Robert Ludlum books.

Just looking for a few minutes, Waddell’s novel appears to be massively plagiarized from The Janson Directive, often with whole sentences verbatim. Look at Chapter 22 of True Deception and then Chapter 6 of The Janson Directive. I somehow doubt these will be the only examples, and wonder if her whole book wasn’t also stitched together, Assassin of Secrets-style.

Dun has also been on St. Martin’s Press about Lenore Hart’s The Raven’s Bride.  Commenter Undine pointed this out in an open thread here in April 2011.  It has been repeatedly brought to St. Martin’s attention earlier this year but apparently have not given any response other than they are looking into it.

Of course, Dun for his efforts is getting the same treatment that Sarah Wendell received when the Smart Bitches exposed Cassie Edwards. Remember when Barbara Samuels called them (and us) without ethics and Jenny Crusie made light of it by accusing the SBs of Cassie Edwards having run over their dog? Good times.