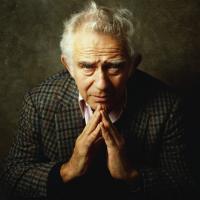 Norman Mailer, a two time Pulitizer Prize winner, died from renal failure at the age of 84 on Saturday. Mailer’s award winning books were The Armies of the Night which his his account of the peace march on the Pentagon and The Executioner’s Song, the true story of the execution of Gary Gilmore.

Mailer was awarded a lifetime achievement award at the 2005 National Book Awards where he decried the decline of both the serious author and the public’s interest in the serious novel.

Obits at CNN, NY Times and an interview with .