Random House is one of the two big six publishers still partnering with libraries for digital content access but as of last week a book that would ordinarily run libraries $28 will now run them $80 .  Eric Hellman argues that this is a good thing because Random House is still willing to partner with libraries and libraries can negotiate.  ALA has come out against the price increase.

I am deeply disappointed in the severe escalation in ebook pricing reported today. Calling on our history together and our hope to satisfy mutual goals moving forward, the American Library Association strongly urges Random House to reconsider its decision. In a time of extreme financial constraint, a major price increase effectively curtails access for many libraries, and especially our communities that are hardest hit economically

Paid Content reports that Amazon will be offering non Kindle versions of digital content in an effort to persuade Barnes & Noble to relent and carry its Amazon published print titles in stores.  If you recall, Barnes & Noble (along with BAMM) has refused to carry print versions of Amazon’s books under the guise that such an action would violate B&N’s commitment to its customers to provide B&N customers “any book, anywhere, anytime” as it stated when it pulled the DC Comics books off the shelves after DC Comics exclusive deal with Amazon.

Confirming the decision, B&N said in a statement, “Barnes & Noble works with thousands of publishers to bring customers the world’s largest selection of physical and digital reading content. However, regardless of the publisher, we will not stock physical books in our stores if we are not offered the available digital format.

“In a few isolated instances, exclusive publisher deals have prohibited Barnes & Noble from selling certain eBooks, preventing millions of our digital customers from access to those titles,” B&N added. “To sell and promote the physical book in our store showrooms, and not have the eBook available for sale would undermine our promise to Barnes & Noble customers to make available any book, anywhere, anytime.”

I’m sure B&N will come up with another excuse to ban Amazon published books although when people come looking for the Penny Marshall autobiography, I’m not certain how B&N customers will react.  The question this piece raised in my mind, however, was whether Amazon would start carrying ePubs along with Kindle versions of each ebook and how devastating that would be. Currently Amazon is making little to no money on its devices.  It wants people to buy content (and other stuff) from Amazon.  If there is no format imperative to stay with B&N, Kobo, Sony, what kind of competitive advantage do they have?  Right now, going DRM free and providing Kindle compatible formats is a good way to leach away customers from Amazon, but if Amazon goes the other direction? Chilling.

This cover and the accompanying PM announcement was emailed to me last Friday. 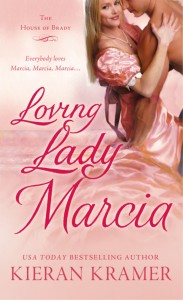 USA Today bestselling author Kieran Kramer’s new series THE HOUSE OF BRADY, following the six aristocratic adult siblings of a blended marriage who carve out their own paths to true love, to Jennifer Enderlin at St. Martin’s, in a significant deal, in a six-book deal, by Jenny Bent at The Bent Agency.

From the author’s blog:

My next project is a 6-book series called The House of Brady. The series will follow the adult romanric lives of each of the siblings in a blended family. The first book is about Lady Marcia. The next will be Gregory’s story. Then Jana’s, Peter’s, Robert’s, and Cynthia’s!!!

I was initially taken aback by what appears to be fan fiction of The Brady Bunch.  I wondered whether this was a violation of IP. Given that we don’t know what the books will be about (hopefully not riffs on episodes as I do think that would be infringement) but the branding of the books and the series clearly call on us to harken to the original series itself.  I emailed SMP and they provided me with this response:

Thank you for the recent inquiry you sent to Jennifer Enderlin about St. Martin’s upcoming publication of the first book in Kieran Kramer’s new “House of Brady” series.  Jen is out of the office, and so she asked me to send you a reply.

I’m not sure where you got your information about the series, but it is not quite accurate.  LOVING LADY MARCIA (as is also true for future books in the series) is a regency romance.  The book is set in London in the early 1800s.  The plots and characters in the novel are not based on any of the episodes from the popular television series The Brady Bunch, which of course was set in California in the late 1960s and early 1970s.  The use in the romance novels of certain character names for the members of the artistocratic family, and the name Brady, is intended as a humorous nod to the tv show, nothing more.  Homage of this sort does not require permission, nor does it raise copyright concerns.

Again, we appreciate your inquiry.

After thinking about this issue over the weekend, I’ve come to the conclusion that this movement toward looser interpretation of intellectual property only benefits readers and content creators. For fans of a series the use of clearly identifiable characters may seem violative of the original, but it opens a host of new avenues of exploration. I am certainly done to death with Pride & Prejudice fan fiction. Bring on the Eve Dallas & Zombies.  Eve and Roarke would make a great co alphas of a werewolf pack.  Someone could finally give poor Stephanie Plum that relationship conclusion some fans have been dying for, albeit in the form of a Victorian setting. (I could definitely see Ranger in a steampunk setting).

I brought this up on twitter and Lis Mitchel (@pixelfish) sent me a link to this video. I about died laughing:

I think I forgot to mention that HarperCollins sold Inkpop, its YA writing site to its larger competitor, Figment. In January 2011, HarperCollins had acquired a manuscript from a writer on Inkpop.

Jackie Collins is going to self publish a rewritten version of The Bitch.

Evidently, this could be more than just a one-time endeavor for the author. “If it does well, I probably will continue to e-publish, because I have a book of short stories and my publisher says short stories don’t sell,” she told [MediaBistro].