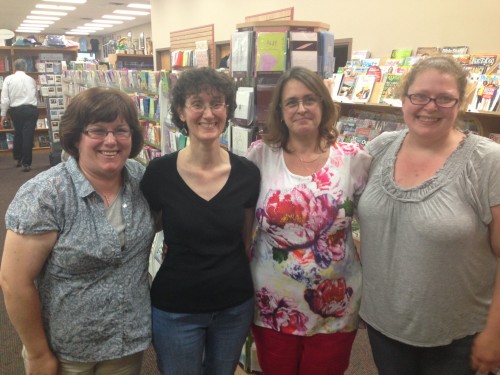 We had a great time last night in Anderson’s Bookshop at the Nalini Singh signing. Here is a crew of Dear Author readers. Ellen came all the way from Alabama. Angela drove down from Madison. Melanie is a native (and a recent convert of RT).  Ellen and Cleo were accompanied by their husbands. I thought it was particularly romantic that these gentlemen accompanied their wives to a 2 hour Q&A and signing. Cleo’s husband, Bill, said that it was the least he could do after all the times his wife has sat through a number of events with his friends but romance is in the small gestures and these two husbands sure seemed to be the epitome of romantic heroes in accompanying their wives last.

The Neurochemistry of Empathy, Storytelling, and the Dramatic Arc, Animated – A short film documents research on how fiction reading can trigger neuropathic responses. Brain Pickings

What he found is that even the simplest narrative can elicit powerful empathic response my triggering the release of neurochemicals like cortisol and oxytocin, provided it is highly engaging and follows the classic dramatic arc outlined by the German playwright Gustav Freytag 150 years ago.

Bowker: self-published e-books 12% of sales – Based on the most recent Bowker’s survey of book buyers, self publishing is making up than 20% of sales in some genres like romance and 12% of overall sales. Overall, e-books made up 13% of consumer book purchases in the first quarter of 2013, the highest level it has reached since figures were first recorded in 2010. The Bookseller


Scarlett Johansson Sues French Publisher for Use of Her Name – Scarlett Johansson is suing a publisher because an author used the her name in a book. I’m not sure what the law is in France, but this is pretty ridiculous  The Hollywood Reporter

In the novel The First Thing We Look At, a woman shows up at the door of a mechanic in the northern village of Somme seeking help.  At first the mechanic believes she is ‘Scarlett Johansson,’ though sixty pages later it is revealed she is not the actress but simply a doppelganger named Jeanine Foucaprez.