Tuesday News: Racism on the internet; CIA spying; and other self fulfilling things

William Shatner calls out Reddit for racism and hate mongering – Reddit is a site that is full of the cutest cat and dog pictures, viral videos at their inception, and interesting question and answer sessions with famous people. Bill Gates was on the site yesterday during an Ask Me Anything where he admitted a fondness for cheap cheeseburgers and a fear of bio terror.  He was promoting his work in administering vaccines in third world countries and improving education in the US.  He ended his Reddit with this thought “helping others can be very gratifying” and a link to picture below: 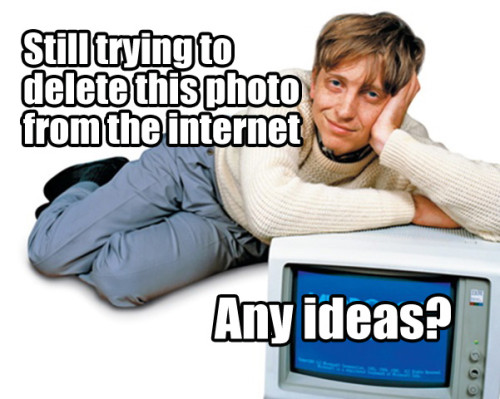 It is also a hotbed of misogyny, homophobia, and racism. Original posters are often called faggots. Defenders of a woman’s right not to be molested in public are referred to as white knighters that are trying too hard. If reddit were a bar, you wouldn’t want to be walking there at night. William Shatner has suggested to the moderators that perhaps the hands off approach was not only fostering negative behaviors, but encouraging it. The response by one redditor was to suggest that Shatner change his front page settings, but changing one’s settings doesn’t address the problems that reddit has. Every day that I visit Reddit, I’m hit with the dual emotions of sick loathing and delighted appreciation. In other words, don’t visit Reddit without a friend. Or five. Pando Daily and Reddit

The CIA knows when you’re hitting the gym – I can’t remember if I linked to this video before but it was my first thought when I read about RIOT, a program developed to search every interaction you have on the internet and develop a profile, in seconds. The problem is that public interaction like checking in on Foursquare and posting updates on Facebook are probably not entitled to any privacy protections. Maybe we all need to go into the woods, Thoreau-style. ITworld

2014 International CES, January 7 – 10 – CES is breaking up with CBS and CNET. The latter two companies were sponsors of the Best of CES awards. In January, information leaked that CNET was taking away the award of Best of Show for the DISH Hopper because DISH and CBS were engaged in a fierce copyright infringement battle. CES has cut ties with CNET and will be seeking a new partnership. The worst damage is suffered by CNET given that the scandal taints every arm of its tech coverage. “ CES Press Release

“Today the International CES® announced that DISH’s Hopper™ with Sling® Whole-Home HD DVR is joining the Razer Edge gaming tablet as co-winners of “Best of Show” under the “Best of CES” awards program for the 2013 International CES. The Best of CES awards program is produced by CNET under contract with the Consumer Electronics Association (CEA) ®, the producer of the International CES. CNET editors originally selected the Hopper with Sling as Best of Show before CNET’s corporate parent, CBS Corp. forced them to remove the Hopper from consideration due to ongoing litigation between CBS Corp. and DISH over specific features of the Hopper. After the Hopper was removed from consideration and a revote by the editors, CNET awarded The Razer Edge as Best of Show.”

32 Of The Greatest Things That Have Ever Happened On Tumblr – And because most of my news was depressing today, I leave you with this link. Also? I did not get number 32 and a few internet friends had to explain it to me. Thank you internet friends. Buzzfeed