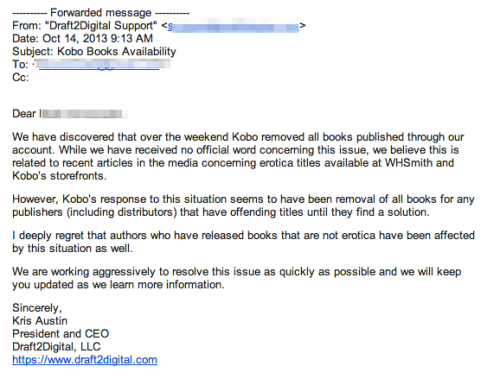 Yesterday, Kobo pulled all the content from the distributor Draft 2 Digital in response to the complaints retailers were receiving about the incest and beastiality books being self published. Authors refer to this content as Psuedo Incest because it is really about step brothers and step fathers, not blood relatives, but because Daddy PI was showing up in the children’s literature section, WH Smith went to the drastic step of shutting down its website (which is likely costing them thousands, if not hundreds of thousands of dollars a day) and Kobo pulled all the D2D content. Much of the D2D content is not “porn” but YA, sweet romance, and the like.

Part of the problem is that authors who are writing PI stuff will relabel their content in order to get around the filters. I think the extreme reaction is due to a few authors trying to mess with the system and reducing the efficacy of filters. For instance, authors would change the title of their book to get through the filter but the cover would have a different title – one that is disallowed. Authors would use the names of famous authors in their tags or descriptions so that the books would show up when someone was searching for other things. I can’t tell you how irksome it was that one author’s porn books kept showing up when I was trying to compile a new release list for “Forever Romance.”

Other authors were putting up excerpts in the description area that were full on sex scenes.

What is clear is that Direct 2 Digital uses no filters unlike Smashwords. None of the Smashwords titles were taken down but the ones from D2D were, likely because D2D had no way of filtering out the questionable content.

There’s been a great deal of panic and accusations flying but the actions appear to be taken primarily by Kobo and WH Smith. For now, it appears the following is true:

Anyway, I digress. Enough people complained and media sat up and now the retailers are doing something. Does this mean that the content is never coming back? Doubtful. Right now it means that Amazon and Kobo are vetting content that they pulled which is likely going to take a really long time.

A web page that lasts forever: the plan to stop “link rot” in law and science — Perma CC is a website managed by a coalition that will create permanent digital resources.  Many times, legal and science articles suffer from link rot or sources and authorities that no longer exist on the internet (or have a changed web address).  This is a serious problem because the sources and authorities providing the underpinning for decisions or scientific conclusions can’t be examined.

The good news is that libraries have a plan to fix the problem. This weekend, the Times Higher Education website published a feature that looks at Perma CC, a site that is creating etched-in-stone digital references for scholars and lawyers. It works like this: a scholar (or anyone else) can submit a link to Perma CC, which is managed by a coalition that includes universities, libraries and the Internet Archive. According to Perma CC, the group will create a permanent URL and store the page on its servers and on mirror sites around the world. Readers who encounter Perma.cc links can click on them like ordinary URLs. This takes them to the Perma.cc site where they are presented with a page that has links both to the original web source (along with some information, including the date of the Perma.cc link’s creation) and to the archived version stored by Perma.cc. There is also a process for scholars and librarians to “vest” certain URLs so that they become an official, permanent citation for law and science journals. This process appears to be a long overdue solution. Here are some more stats cited by the Times Higher Education feature: Link rot at influential science journals rises from 4 percent at three months to 10 percent at 15 months to 13 percent after 27 months. 98.3 percent of web pages change in some way within six months, while 99.1 percent do within a year At three Harvard legal journals, over a 12-year period, 70 percent of the links no longer worked.

Indie Authors & Paid Reviews – Amy Idelman hosted a short roundtable discussion about reviews and indie authors.  One person pointed out that the backslapping between mainstream authors existed and without much of any criticism.  Indies have less resources than mainstream authors and so, if they did engage in paid for reviews, is it just a leveling of the playing field. They also discussed authors as reviewers. I don’t blame authors for not reviewing. Too many others view it as a betrayal akin to sleeping with one’s husband.

Amy brought up the recent Zoë Heller’s recent article in The New York Times, which encouraged novelists to review because “their contributions help maintain the rigor and vitality of the public conversation about books.” And further, “Whenever a novelist wades into the critical fray, he is not only helping to explain and maintain literary standards, but also, in some important sense, defending the value of his vocation.” It would take a huge sea change for authors to feel safe in reviewing and frankly I don’t foresee that change happening soon. Indie Authors & Paid Reviews – IndieReader

Finally, this is really creepy.  The Stop the Goodreads people are combining forces with a group of authors to run giveaways at Goodreads to collect and compile personal information from Goodreads users.  When you run a contest (and I’ve done this once on behalf of a publisher I think), Goodreads sends you a CSV file with all the winner’s names and addresses.  I can’t remember if the contest holder gets the entire results or not.  But wow, super creepy. Be careful out there you guys.

For those who can’t read the screencap, the first person asks what “her Goodreads or Librarything identity? I have a group of three dozen authors who have collected and compiled the real life addresses and email address of those trolls through their free book giveaways.  We also know 3 friends who are dormant friends in stalker circles.”

But it’s the Goodreads readers who are the problem, right?