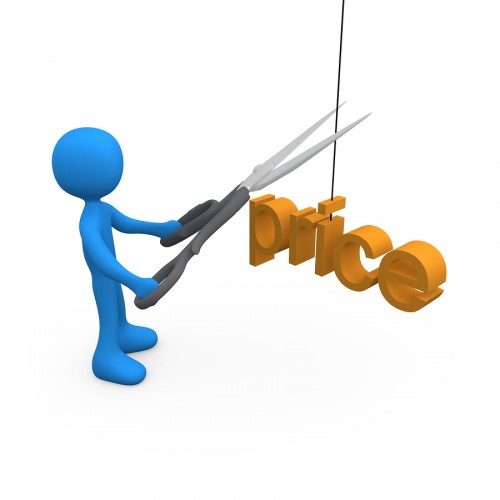 Thanks to our sharp eyed commenter, Rosie, we led the scoop on HarperCollins’ abandonment of agency pricing yesterday. From there, Laura Hazard Owens, worked her contacts and got a confirmation from Amazon that it was indeed going crazy with the discounting of HarperCollins books.  Followed close on the heels of this was a Books on Board email that said “BooksOnBoard welcomes back Discounts for Harper Collins eBook titles! This week only! 24% Off all HarperCollins eBooks!”  All Romance eBooks confirmed for me that HarperCollins books could now count toward buy club purchases and future promotional programs. (This also means that HC books can be part of Smart Bitches’ Sizzling Book Club).

Despite some industry experts’ suggestions that the industry would remain in stasis until well into the holiday buying season, it’s likely the settling publishers are anxious to put these lawsuits behind them and ensure no interruption in book selling during one of the most important times of retailing during the year.

Most of the discounts appear to be in the 10-20% range, but all appear to have some kind of discount.  How do you know?  Look at the lines underneath the price.  If it says “price set by publisher”, it’s still agency pricing.  As you can see by the HarperCollins published book, however, it says only “Sold by HarperCollins.” 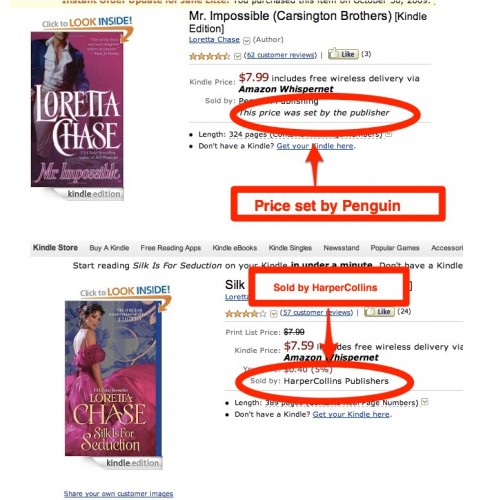 My take from all this? Dear Author has some of the best commenters on the internet.

Barnes & Noble’s Web Terms Of Service Not Enforceable Without Evidence That They Were Seen – A consumer filed suit against B&N for not living up to an advertised price for a tablet. B&N tried to force the consumer into arbitration per the terms of service on the website. Giving up one’s right to their day in court usually requires an affirmative waiver. The District Court in California agreed.   Techdirt

The court held: “We disagree with the proposition that a reasonably prudent offeree in plaintiffs’ position would necessarily have known or learned of the existence of the . . . license agreement prior to acting, so that plaintiffs may be held to have assented to that agreement with constructive notice of its terms.” (Id. at 30.) The court concluded that “plaintiffs’ bare act of downloading the software did not unambiguously manifest assent to the arbitration provision contained in the license terms.” (Id. at 20.) The same is true here. Defendant did not position any notice even of the existence of its “Terms of Use” in a location where website users would necessarily see it, and certainly did not give notice that those Terms of Use applied, except within the Terms of Use.

This could have far reaching effects including determining whether a product is a sale (it does say “buy” not “rent”) versus lease.

Google Drive: Updates for iOS and Android – Great news for mobile users. Google has updated its apps for iOS and Android and now you can edit and create Google Docs via your iPhone, iPad, and Android devices. (I think Android app has had this feature for a while). You’ll also notice other new improvements to the iOS Drive app. For example, you can now view Google presentations on your iPhone or iPad, including speaker notes, full-screen mode and the ability to swipe between slides. You can also create new folders, move files into folders and upload stuff (like photos and videos) from your device directly in the Drive app. Google Blog

Police using license plate readers are creating a national database of our movements – Creepy. When do we all get fitted with our state mandated GPS bracelets? Sussex County Angel

The 13-year-old who has the world planting trees – There seems to be a surfeit of negative things to read about (including here at Dear Author, sorry about that) so this inspiring story of an 11 year old who is helping to plant 1 million trees and counting is one I had to share. Felix Finkbeiner started as a seven year researching a science project. He stumbled across Wangari Maathai who won a Nobel Peace Prize for her tree planting efforts. His classroom project was a speech on climate change and tree planting, or increasing the output of oxygen by having more trees. He was encouraged to speak to more classrooms and when he got so busy, he asked his parents if he couldn’t get an employee if he was able to obtain the money for it. Soon, Felix’s project was being funded by Toyota. Telegraph UK

→ Jane
Previous article: REVIEW: As You Wish by Elyssa Patrick
Next Post: REVIEW: His Very Own Girl by Carrie Lofty