Gartner predicts raft of fake online reviews by 2014 — Tech News and Analysis – One research company suggests that the negative reviews on social media sites will drive companies to hire reputation defenders to put pressure on reviews to be removed or engage in other activities to enhance positive reviews over negative ones. Perhaps the FTC will start prosecuting this behavior but it does seem like fake reviews might be the norm in the near future. GigaOm 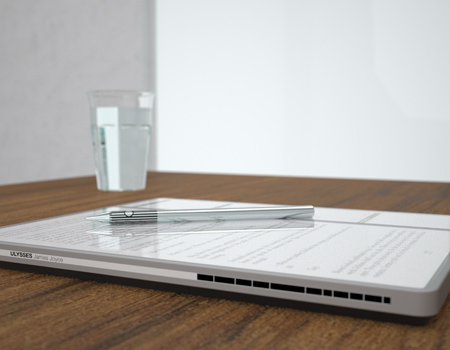 Bibliofile + Community Book / Nadeem Haidary – Nadeem Haidary developed an ereader prototype that recharges when the reader swipes to turn the page. Pretty cool invention but one that likely won’t make it to the mainstream devices for some time.

“This electronic book reader uses page-turning gestures to generate the power necessary to update an e-paper display. These gestures provide cognitive, mechanical and digital feedback to the person using the device. The device’s Active Reading margin supports the reader by providing applications like a dictionary and word games in a way that doesn’t distract like reading texts on a computer does. By harnessing both human and computing power, Bibliofile provides a rich reading experience for avid readers.”Nadeem Haidary

Twitter Hires Elite Apple Hacker Charlie Miller To Beef Up Its Security Team – Forbes – A reader on Twitter alerted author Julie James to this article about Twitter hiring an “elite” hacker to work on security for Twitter. Julie James’ latest release, About That Night, features a hero called the Twitter Hacker who eventually makes his comeback by getting Twitter to hire his firm to do security. Forbes

New Study: 55% of YA Books Bought by Adults – A new Bowkers’ study reveals that more than half of the individuals buying YA books are adults with the largest buying segment aged 30 to 44 and most of the time, these adults are buying the books to read themselves.  Given the popularity of Twilight and Hunger Games with adult women, this doesn’t surprise me. This is also why I believe that mature YA or New Adult is blowing up the self publishing charts. Older women want to read more explicit love stories. The PW story has additional numbers that you all might find interesting and would likely reflect your own buying habits. In other words, Dear Author audience, you are a very valuable segment of the book buying community. Publishers Weekly

→ Jane
Previous article: Blogger Feature: Have you heard of Romance Around the Corner
Next Post: REVIEW: My Liege of Dark Haven by Cherise Sinclair