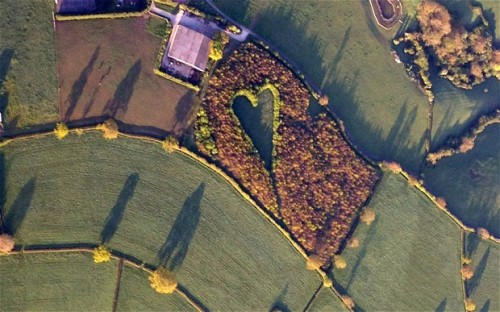 Farmer creates heart-shaped meadow in memory of wife – “Dedicated Winston Howes, 70, spent a week planting each oak sapling after his wife of 33 years Janet died suddenly 17 years ago. He laid out the fledgling trees in a six-acre field but left a perfect heart shape in the middle – with the point facing in the direction of her childhood home.” Telegraph

Livrada Announces National Launch of New Innovative e-Book Gifting Solution – “Starting Sunday (July 15th), Livrada e-book gift cards featuring such best-selling novels as “Fifty Shades of Grey”, “The Girl who Kicked the Hornet’s Nest”, “Gone Girl” and “State of Wonder,” published by Random House, Inc. and HarperCollins Publishers will be available for purchase in all 1,771 Target stores nationwide.  …. Each card is associated with a specific book title and designed to be visually appealing, featuring the book’s original cover art and description. Livrada has designed a seamless redemption experience; gift recipients simply visit http://www.livrada.com to redeem their PIN code, which allows them to download an e-book directly onto their Kindle or NOOK e-reader.” SF Gate

Symtio was in the business of selling digital books via physical cards.  Symtio who, right?

Amazon same-day delivery: How the e-commerce giant will destroy local retail. – Slate Magazine – “But Amazon isn’t simply opening up a lot of new shipping centers. It’s also investing in making those centers much more efficient. Earlier this year, it purchased Kiva Systems, a company that makes cute, amazingly productive “picking robots” that improve shipping times while reducing errors. Another effort will allow the company to get stuff to you even faster. In Seattle, New York, and the United Kingdom, the firm has set up automated “lockers” in drug stores and convenience stores. If you order something from Amazon and you work near one of these lockers, the company will offer to drop off your item there.” Slate

I admit I would love to order something from Amazon and have it delivered the same day.

Are Men Going Extinct? I Fucking Hope Not! – “If you’re not turned off by SCIENCE, this actually-pretty-accessible-and-conversational Slate piece explains how men’s XY chromosomal structure is making their DNA shittier and shittier with each generation. Basically (please now enjoy my pseudo-scientific floundering—I did get As in chemistry AND physics, BTW!), certain palindromic DNA strands, like CTAGCTAG and GATCGATC, are bad (bad!!!), because they get all kinked up and make it impossible for DNA to replicate (cell death! Bad!!!). But smart little DNA strands do this thing called “crossing over,” where the two chromosomes tenderly hug and trade their troublesome bits for the troublesome bits on their neighboring chromosome. Then, no more palindromes, and everyone’s healthy! Oh, except for dudes.” Jezebel

→ Jane
Previous article: Something is very wrong with us, and it’s not bad reviews
Next Post: REVIEW: A City of Broken Glass by Rebecca Cantrell