Kristan Higgins Tackles the Lack of Diversity in Romance – Although this was originally a Book Talk Nation link, after some Twitter feedback, BTN (wisely) pulled the post. If you want to see a screen cap, you can find one here. Another white author is credited for “diversifying” the Romance genre. Suleikha Snyder’s most excellent comment pretty much sums up why this is wrong and bad. 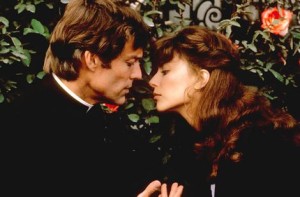 For A Sheltered Teen, ‘Thorn Birds’ Was A Much-Needed Eye-Opener – Therese Walsh’s essay about how The Thorn Birds had a lasting influence on her. Although she was initially attracted to the book for the sex (and a comment from her former English teacher takes on a bitter irony), that’s not what kept her reading. An interesting, thoughtful piece about the unexpected, unpredictable, and important ways in which books matter.

I felt the book like I’d felt no other book before it, and I still have in my possession the paper I presented for that class. The themes of commitment and obligation as they related to love, family and even religion resonated keenly with me. I wrote about all the ironies, like the way Ralph’s commitment to God waned and perhaps morphed into obligation when he fell in love with Meggie, or the way Meggie remained committed to Ralph despite her marriage to another — a marriage that, soon after the honeymoon, seemed reduced to obligation.–NPR

It’s not only adults who need comfort reading – According to a study focused on what English children are reading, by the time they reach year seven, they are reading at a level that is a year below their age. While many things in this article deserve closer consideration (not the least of which is that comfort reading is regressive), not everyone is convinced this study heralds a crisis in British literacy:

According to the report’s author, Professor Keith Topping, this is a “matter for alarm”. According to Philip Pullman, speaking on Radio 4 on Wednesday, there’s not much need for panic. “Isn’t it only the natural thing to do? You go from being a big child in a small school to a very small child in a very big school. There’s all sorts of new anxieties, new people to meet, thousands of new things to do – so isn’t it natural you turn back to the things you felt safe with when you were younger? I remember doing that myself,” said Pullman. “I am a bit puzzled why there’s all this anxiety, that they’re not reading for pleasure, that they’re reading the wrong books. Well, no, it’s not the wrong book. If the child is enjoying it, it’s the right book.” –Guardian

Teju Cole: By the Book – I enjoy these “by the book” interviews and think this one is definitely worth passing on to the Dear Author readership. Teju Cole, art historian, writer, and photographer, talks about poetry, writers he loves, and his belief that the novel is “overrated.” Although I disagree with that last assertion, I loved his answer about what books he hasn’t read and found his comments about Twitter provocatively compelling:.

I suppose it must. It’s such a combative place at times that it makes me less worried about putting ideas out into the world. You realize that anything you have to say is going to annoy some stranger, so you might as well speak your mind. But being active on Twitter also means that the literary part of my brain — the part that tries to make good sentences — is engaged all the time. My memory is worse than it was a few years ago, but I hope that my ability to write a good sentence has improved. –NYTimes

→ Janet
Previous article: REVIEW: Death Sworn by Leah Cypess
Next Post: What Does it Mean to Read for Comfort?