Evidence being presented in Missouri sex abuse case raise questions about consent vs. crime – “Ed Bagley faces a federal trial early next year on 11 counts of abuse against a woman authorities say he groomed to be his sex slave. Now prosecutors plan to present consensual, though violent, acts between Bagley and his own wife as evidence that Bagley has a history of sexually assaulting women.” This is a fairly disturbing story on all sides. The alleged wrongdoing started in 2002 and given that the young woman being groomed was 23 in 2009, it suggests that she was acquired and “groomed” at the age of 16 or so.  The girl’s suspected abuse came to the attention of authorities after she was hospitalized.  The girl was made available to other men.  In the federal indictment are accusations of abuse against “Master Ed” toward his wife.  “Advocates for the BDSM community say even the most brutal acts detailed in Bagley’s federal indictment are not criminal acts, as long as there was consent.”  In real life, the issue of consent can be really challenging.  This reminded me a bit of the disturbing story that Kati D and I read. The Washington Post 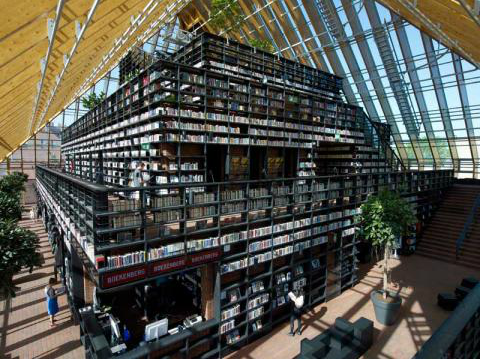 MVRDV – This beautiful library took 3 years and $39 million to build and exists in Spijkenisse, Netherlands. For all those worried about the paper exposure to glass, the MVRDV says “damage to the books by sunlight is off-set by their normal 4 year life-span due to wear and tear from borrowing.” or as one commenter at Gizmodo rephrases – the books aren’t going to last long anyway.  Via Gizmodo

Amazon: An Unlikely Banker for Small Businesses – Amazon is lending money to small businesses who are selling goods through the Amazon Marketplace. “Merchants who spoke to The Wall Street Journal said they were offered loans ranging from $1,000 to $38,000 apiece, with interest rates from less than 1% (for one of them) to 13.9% (for most who were interviewed). Small-business credit-card interest rates typically range from 13% to 19%.” I guess that is one way to keep prices low. WSJ.com

Google Wants to Be a Bank Now  – The Antlantic reported on Google’s new lending program which allows businesses to borrow money to spend on the Google AdWords programs.  Starting in the U.S. and then spreading to other countries, however, Google will issue credit cards as part of the new financing program, with initial interest rates for small- to medium-sized businesses at a competitive 8.99 percent.”  With Amazon and Google becoming financial institutions, surely Facebook can’t be far behind.The Atlantic Wire

Spotify Revenue – Spotify’s business model allowing people to listen for free is running up huge losses as it fails to convert enough customers from free to paid. The low revenue production and/or failure of the Spotify model will decrease the willingness of publishers to try this type of all you can eat subscription model. Business Insider

How People Profit from Your Online Mug Shot and Ruin Your Life Forever – Along the lines of human flesh searches is the ongoing criminalization of behavior through public shaming. If you get arrested and booked, your mug shot is taken and that becomes public record. Mug shots are becoming the a huge internet business. One of the worst perpetrators of the weekly public mugshot shaming is Miami New Times. Even though publicly posted mug shots can adversely affect a person’s ability to obtain a job, a date, or maintain a respectable reputation, the editor in Chief of the Miami New Times says its all in fun. “in every circumstance, it’s done in good fun.” But these are criminals, right? So it’s of no concern to the rest of us law abiding folks who drink in moderation, don’t get into fights with our spouses, and generally keep our noses clean, right? Gizmodo

→ Jane
Previous article: Why I read YA
Next Post: REVIEW: Lightning Rod by Vaughn R. Demont