Tuesday News: B&N to launch in the UK in October; Penguin and Harlequin Australia launches digital first lines; The next generation wristwatch 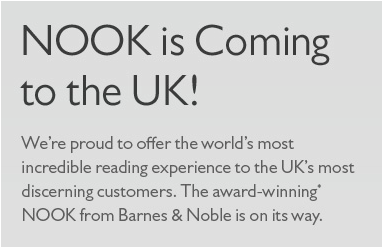 Barnes & Noble to launch in the UK in October – Barnes & Noble will launch http://nook.co.uk in Mid-October and will announce partnerships with “leading UK retailers” shortly. “The first products to be available when the company begins offering its products in the UK in mid-October include Barnes & Noble’s line of critically acclaimed E Ink® Readers, NOOK Simple Touch™ and NOOK Simple Touch with GlowLight™, the top-ranked eBook readers in the US.” I don’t understand why B&N isn’t trying to offer the tablets. The Nook Simple Touch demand is very low in the US and B&N’s high expectation of sales led to diminished results last year. B&N Press Release

Disruptions: The Next Wave for the Wristwatch – Do you want a wristwatch that does more than tell time? Electronics manufacturers are hoping you will. Companies like Sony are developing watches that allow you to control your cell phone. One of the most successful Kickstarter projects ever was for the Pebble, an Android based watch that could communicate with an Android device and allow you to read emails, check your calendar, and work as a remote control. I have an iPod Nano that I use for walking, running, and listening to audio books. I’m going to blog more about this device on Sunday. NY Times

How Microsoft Lost Its Mojo: Steve Ballmer and Corporate America’s Most Spectacular Decline – Kurt Eichenwald explores the “fall” of Microsoft from computing giant to after thought. Apple, under Steve Jobs, transformed the consumer technology industry with not just the iPhone but the iPad which created a market that had been heretofore shunned by consumers. Tablet adoption will now outpace home PC adoption in a few years. Microsoft still dominates in the business world but the iPad is slowly encroaching even that market. The summary is that big companies have a hard time adapting.Vanity Fair

“The story of Microsoft’s lost decade could serve as a business-school case study on the pitfalls of success. For what began as a lean competition machine led by young visionaries of unparalleled talent has mutated into something bloated and bureaucracy-laden, with an internal culture that unintentionally rewards managers who strangle innovative ideas that might threaten the established order of things.”

A Major Advance Toward a Birth Control Pill for Men – Jay Bradner of the Dana-Farber Cancer Institute and Martin Matzuk Baylor College of Medicine has developed a molecule that can inhibit the production of sperm. This could lead to a male birth control bill. However, because it doesn’t prevent semen from ejaculating, sexual diseases could still be transmitted. I can just imagine the scenes now. “I’ve just been checked out via my military health services and I’m on the pill, baby. I’m safe.” Puhlease. Lindsay Abrams – The Atlantic

NEWS: Harlequin launches digital-first imprint with Australian focus – Harlequin Australia has a new worldwide, DRM free imprint called Harlequin Escape. The focus of the books will be on Australia (and I suspect New Zealand). There is no advance. The royalty rate is described as “high” but I haven’t pinned down any details.  Edited to add: The first books will be released worldwide in October. Book Thingo

Edited to add:  I received a few answers from Harlequin Australia.

Destiny Romance – Destiny Romance is a digital first imprint of Penguin Australia. There are no details on financial terms but authors can submit online. The books do not appear to be available worldwide. I tried to buy the Kelly Hunter title via Amazon and it wasn’t available to US readers. Hunter in the comments to Book Thingo’s post indicates that there should be worldwide release forthcoming. No details, however. The books also appear to have DRM according to BookThingo.Destiny Romance

What is Destiny Romance looking for? Destiny Romance is passionately interested in all kinds of romantic fiction, from sweet and tender through to saucy and sensual. We’re looking for all subgenres, including but not limited to: contemporary, historical, suspense, paranormal, fantasy, sci-fi and erotica. If you’ve come up with a new style of romance, then we’re interested in that too. We are accepting shorter length stories from 25,000 words right up to full-length novels of 100,000-plus. We will not consider manuscripts of less than 25,000 words, non-fiction work, children’s books or poetry. A strong voice, originality and intense emotions will help your manuscript stand out in the crowd. At this stage, we are particularly on the hunt for historical (Regency) romance, contemporary romance featuring high-powered men and women, medical romance, and erotic romance.

Apparently Soho Press is launching a YA line. You can see the debut trailer at The BookSmugglers. The press email I received yesterday promised something very neat if I posted the “exclusive” code. So here it is. Anything exciting happening? Dollar bills falling out of the screen?