Tuesday News: Argentina is a writer’s heaven (also a haven); NPRs Best YA list under fire; and a little lesson on GIFs 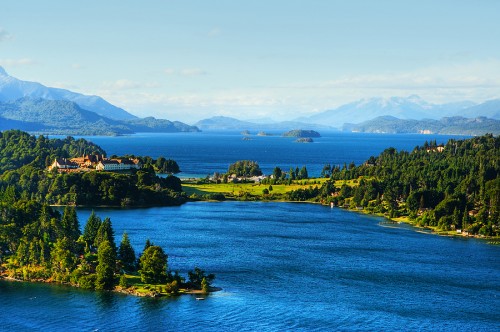 Image via Big Stock Photo. The Lakes in Patagonia, Argentina

Argentina Offers Its Aging Writers a Little Security – All authors should move to Argentina and not just because this is the view. The literary tradition is rich and supported by the government. Writers are given governmental grants up to around $900 per month. 82 authors have received such grants so far.

“It is not enough for this city to boast cavernous bookstores that stay open past midnight, broad avenues once roamed by literary giants like Jorge Luis Borges, cafes serving copious amounts of beef and red wine, or even a bizarre neo-Gothic skyscraper, the Palacio Barolo, inspired by Dante’s “Divine Comedy.”… Now, writers have yet another reason to live here: pensions.”NYTimes.com

Togather Releases Tool to ‘Fansource’ Author Events – The idea behind this is that authors post available dates and then fans buy in. The tour date is not fulfilled unless the predetermined tickets are sold out.  GalleyCat

On NPR’s Very White Best Young Adult Books List – NPR compiled a list of the top 100 YA books ever published.  It is so obviously wrong because Anne of Green Gables is not in the top 10.  How can that be?  As one blogger pointed out, John Green’s entire bibliography is on the list.  While Green is a good writer, his five appearances owe far much more to Green’s popularity online than to the quality of his books.  Worse, as blogger Shakesville points out, there are only two books about teens of color.

“Clearly, audience-selected “Best Ever” lists are dangerous and problematic, but the absence of any indication of NPR’s awareness of the glaring neglect on their list is also troubling. A list of “Best-Ever” books that declares only two books about teens of color worthy keeps all of these amazing stories in the margins, and arguably marginalizes them even further. When the world of reading remains so predominantly white, children and teens of color receive the clear message that they don’t belong. It sends a message directly from readers as well as NPR that writing about people of color is not valuable or valued, that their stories aren’t as important as the trials and tribulations of Edward and Bella; the Twilight series ranks #27. “Shakesville

Why Do Female Authors Dominate Young-Adult Fiction? –  The author of this article, Meghan Lewit, can’t decide if she despises YA literature and female authors or thinks that they are of limitless potential. She swerves from calling female authors “chicklit purveyors” and YA fans as being “adverse to nuance” to identifying youth as a time “when reading was an act of pure joy and escapism.” It’s okay, Meghan Lewit, to be proud of your reading tastes, no matter what they are even if your audience at the Atlantic would be so insecure that they would need to criticize you for your choices.

“And perhaps, therein lies the true appeal of young adult literature: The stories and the genre itself represent a world of limitless potential. As a young reader, I didnt comprehend that the opportunity to disappear into the lives and adventures of strong-willed young women represented a kind of feminist victory. I was blissfully unconcerned with the gender of my favorite authors, or what reviewers might think of my beloved fictional worlds.” Atlantic

What journalists need to know about animated GIFs — really – One of the largest points of contention over at Goodreads is the use of GIFs in reviews. For some reason animated images to express thought is super offensive. Me? I love gifs. My favorite gif creators are SBNation (scroll down for their selection of Closing Ceremony GIFs).

“More compelling than a static photo and more immediate than Web video, the animated GIF (correctly pronounced with a soft g) is a uniquely digital mode of conveying ideas and emotion. Like the Twitter hashtag, which has transitioned from a functional way of sorting content to its own part of speech, the animated GIF has gone from a simple file type to its own mode of expression. GIFs have grown up, and they are everywhere right now.” Poynter

Burner: Stop Worrying About Creeps Calling –  This is an app for iOS (iPhone) that costs $1.99. Your number is fake and when you are done with it, you can terminate the number.Gizmodo

Cyborg America: inside the strange new world of basement body hackers –  It’s called biohacking. I was reading The Edge of Danger by Lisa Marie Rice last week. It’s an early November release and the plot is centered around scientists who are trying to create a super soldier through chemical injections.  This is a very common trope within romance (Laurann Dohner, for example, uses it and Shannon McKenna has been dabbling in the chemical based enhanced person for a few years now). Biohacking is something different.  It takes the existing body and supplements it was minerals (like magnets) and manufactured devices. Science fiction books have already taken this concept and ran with it but the the potential for the super augmented human doesn’t seem so far away and strange.

“As an example of how that might work, Cannon showed me a small device he and Sarver created called the Bottlenose. It’s a rectangle of black metal about half the size of a pack of cigarettes that slips over your finger. Named after the echolocation used by dolphins, it sends out an electromagnetic pulse and measures the time it take to bounce back. Cannon slips it over his finger and closes his eyes. “I can kind of sweep the room and get this picture of where things are.” He twirls around the half empty basement, eyes closed, then stops, pointing directly at my chest. “The magnet in my finger is extremely sensitive to these waves. So the Bottlenose can tell me the shape of things around me and how far away they are.””The Verge