Warning: mysqli_query(): (22032/3141): Invalid JSON text in argument 1 to function json_contains: "Invalid value." at position 0. in /home/customer/www/dearauthor.com/public_html/wp-includes/class-wpdb.php on line 2187
 Tuesday News: #AmazonCart on Twitter; the real, made-up Apple Earbuds; the Book Smugglers try publishing; and how do you handle book jackets
May 6, 2014

Tuesday News: #AmazonCart on Twitter; the real, made-up Apple Earbuds; the Book Smugglers try publishing; and how do you handle book jackets

Twitter’s New #AmazonCart Deal Won’t Be Its Big Commerce Moneymaker – So now you can add products to your Amazon cart with a Twitter hashtag. First, of course, you have to link up the two accounts, and I don’t think the service works for items that can only be purchased with a one click setting (like digital media). But this is a pretty interesting experiment, even if it’s not anticipated to be a major cash cow for Twitter, which will not be making any money off the hashtag. Which strikes me as a good thing in terms of precedent, but it also makes me wonder how Twitter is going to apply the results of the experiment to its own business model.

Jane’s note: This does not work for digital products as I was told that digital products don’t use the shopping cart but the 1 click buy instead. Therefore when you use #AmazonCart with a kindle link, you are sent an email and a sample. 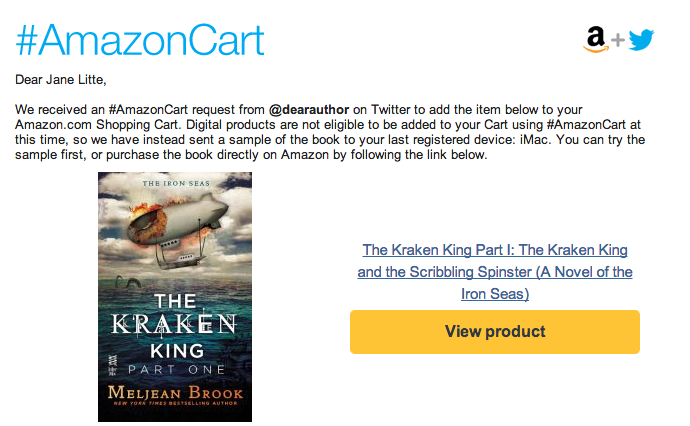 Yet even if the new partnership becomes a hit, Twitter won’t get a cut of any of the sales that originated with the #AmazonCart hashtag, spokespeople for both companies confirmed. So for those waiting for Twitter’s real commerce initiative, in which the company will make money by letting its users buy products and services right in their Twitter streams, this isn’t it. –re/code

I “Leaked” the story about the Biometric EarPods. But I’m not proud of it. – So did you see the “secret” about Apple releasing EarPods with a blood pressure and heart monitor?  Well, the person who put that on Secret actually made it up, and in an eerie, paranoia-inducing twist, Apple is, in fact, planning just such a product. Which has led to an interesting situation, because Apple tends to be somewhat pissy about employees leaking information about its products, and the person who made this little item up doesn’t want to get anyone from Apple into trouble, nor does he want to be seen as a prospective Apple employee. This story kind of reminded me of the post I referenced last week about the interplay between science and Science Fiction.

I’d been messing around with secret as an outlet for comedy. The anonymous nature makes it a fun place to post things you can’t on twitter. I’ve been posting a few jokes there for a week or two. Because of the way Secret works, your posts only go to your friends and so I’ve been posting stuff there to try and give my friends a laugh. I like jokes and funny ideas and so Twitter and Secret are great for this kind of stuff. I wouldn’t go as far as to call it art but it’s a place I can test my creativity in a way I like to. –Tumblr

Announcing Book Smugglers Publishing: We Want Your Short Stories – Speaking of coincidences, when we posted our little April Fools’ joke here at Dear Author, little did we know that a reader blog would actually try its hand at publishing. But today, Ana and Thea, collectively known as The Book Smugglers, announced that they are looking to publish original short stories. I’ve always had the highest respect for Ana and Thea and for their excellent blog, and I know I shouldn’t be surprised at this turn of events, but I’d be lying if I said I wasn’t. Will this change how readers perceive their blog? Will it start a new trend among bloggers? It’s definitely a bold and interesting move on their part, and I wish them the best of luck.

This time, we’re looking for original short stories from all around the world. Our goal is to publish at least three short stories every year, unified by a central theme (that will change each year). Each short story will be accompanied by one original piece of artwork from an artist commissioned by us separately.

In 2014, we are looking for subversive fairy tale retellings. –The Book Smugglers

Do You Remove Book Jackets? – As much as I love the idea of a book jacket, more often than not I find it gets in the way of reading. How about you – do you remove a book’s jacket or leave it on? Or do you take it off while you’re reading, or maybe use it as a bookmark? There’s a link to a blog post on the subject and a survey, and you can click on either the Mental Floss article or the original blog post first if you don’t want to know which side is winning so far.  –Mental Floss

→ Janet
Previous article: JOINT REVIEW: Stranger on the Shore by Josh Lanyon
Next Post: REVIEW: The Professional by Kresley Cole