Create a Searchable Catalog of Your Bookshelf by Snapping a Picture into Evernote – Evernote is evolving into one of the best Apps available. Not only is it full featured but it is free. Two unique uses include Evernote’s built in OCR capabilities that it launched with a new budget scanning service 1DollarScan (which has recently come under attack by Authors Guild). LIfehacker suggests snapping a photo of your bookshelf and Evernote will create a searchable inventory automatically.

Another great tool is one that Evernote is developing with Moleskin. From Nate, the Digital Reader’s blog, are details about a new Moleskin notebook that is designed to allow you to take handwritten notes that will be OCRed by Evernote. The reason why the Moleskin notebook is superior is because “The new notebook improves on the existing feature. The pages of the notebook are covered in a pattern of dots which are design so that the app can use them to correct for the distortion introduced by the camera. This enables you to add a page of notes as a rectangular note and not as a photo.”

And, there are even more cool features. Add a moleskin included sticker and it will be associated with a predefined tag. The notebooks aren’t cheap at $30 each.Lifehacker and the Digital Reader 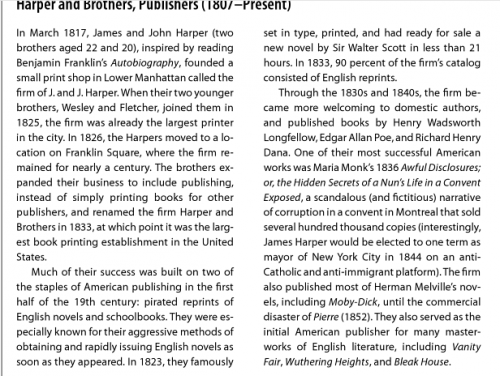 Henry Altemus Co – Peter Rabbit First Edition – When I was researching the serial piece, I came across Industrial Revolution: People and Perspectives By Jennifer L. Goloboy, Peter C. Mancall. According to an excerpt of the book, the success of early American publishing was due to rampant piracy of British novels. One example of such piracy was the first American printing of Peter Rabbit. It’s kind of crazy to think that the foremost publishers of our time in the U.S. were founded on piracy.  Henry Altemus

Victoria Barnsley: ‘We can’t think of ourselves as book publishers any more’ – HarperCollins is determined to stay viable in the new digital consumption world. With 20% of its income in the UK from digital sales and nearly half in the US, HarperCollins is looking at data to engage in dynamic pricing to meet the market. “Nearly half of sales at HarperCollins’s Avon imprint, which specialises in the genre, are now in e-book format.”

Victoria Barnsley’s biggest new signing is not a Booker prizewinner, but a Spanish data analyst: she refers to Eloy Sasot, recruited from American Express, as her “secret weapon”. His team monitors sales around the clock, making the discounts or mark-ups needed to stay ahead of the competition.  The Observer