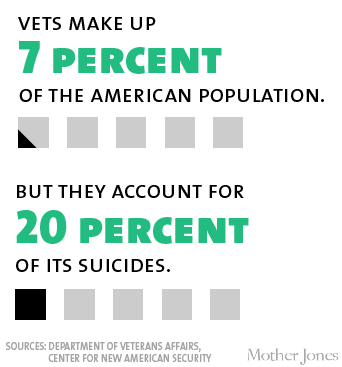 Charts: Suicide, PTSD and the Psychological Toll on America’s Vets – Mother Jones has complied statistics to create an infographic on the terrible mental toll that the war has taken (and is currently taking and will be taking) on our soldiers. The mental disorders often translate into negative physical outcomes. Veterans make up 7% of the US population but account for 20% of its suicides. Mother Jones

Amazon Kindle ebook rentals take the time out of reading – Slashgear believes that Amazon may be testing out rental of books on the down low. It points to the sale page of “Theories of International Politics and Zombies” which has a rental option. Textbooks have been available for rent on Kindle for some time but the International Politics and Zombies book is a book of humor although it is published by Princeton University Press. Additional research shows other Princeton University Press books

for rent but there does not seem to be any consistency in which books are rentable and which are not. SlashGear

GQ’s Sexiest Women List Includes ‘Hottest Chinese Chick’ and ‘Hottest Indian Chick’ – Non white women get their own special category of hotness according to GQ magazine who itemized the Hottest Indian Chick and Hottest Chinese Chick separately from the mainstream hot chicks. These Asian chicks were placed in the same sub categories as the hottest blue chicks and the hottest pregnant Sri Lankan. I guess I can’t blame those poor college boys who think that Asians have something special going on downstairs when we are placed in the same listing as blue cartoon characters.   Jezebel