Beware the False Privacy Notice Posted All Over Facebook – A fake copyright notice spread around Facebook yesterday claiming that under the “Berner Convention” if you declared your copyright over uploaded photos and facebook statuses, you would be able to prevent Facebook from reusing them without your permission. There is no Berner Convention, it’s the Berne Convention and the terms of service may or may not control the copyright. I say may not because terms of service are becoming increasingly litigated. One California court found that the Sign Up TOS by Facebook was enforceable but other courts may not.


Still, this disclaimer has no real legal effect. Facebook posted a response stating that the copyright rests with the owner of the media, but that Facebook enjoys its non exclusive license to reuse the content in whatever way they want.Lifehacker

Educational outreach program Pixel Academy looking for a place to call home – Because our world is being increasingly dependent on technology, I’m becoming convinced that rudimentary coding skills should be taught in school at an elementary level and forward. It’s another language and one that our kids should learn to speak at an early age. Pixel Academy is a group of people (and devices) that are looking for secure and stationary place to teach kids code in NYC. VentureBeat 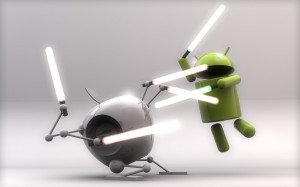 Low Commerce And Web Usage On Android – Henry Blodget is wondering why so little of the online traffic comes from Android devices despite Android based smartphones outselling the iOS mobile platform in the US and abroad. IBM did a recent study of Black Friday sales which showed that iOS devices accounted for 20% of sales and Android devices only 5.5%.

Mobile users make up approximately 27% of all of the traffic at Dear Author. About 2/3 of that mobile traffic is from iOS users and 1/3 from Android users. Talking Points Memo shows a similar discrepancy.  Either the Android platform isn’t as easy to use for web browsing or, as Josh Marshall posits, maybe Android people just have fuller lives and don’t spend as much time on the internet.

What do you say, Android users?  Business Insider

Amazon Raises $3 Billion With First Bond Offering in a Decade – Businessweek – Amazon is offering bonds to fund the purchase and renovation of Amazon’s new headquarters. Amazon issued bonds in 1999 at 4.75%, 10 year convertible notes. Amazon, which had no bonds outstanding, sold $750 million of 0.65 percent three-year notes that yield 38 basis points more than similar-maturity Treasuries, $1 billion of 1.2 percent five-year debt with a 63 basis-point spread and $1.25 billion of 2.5 percent securities maturing in 10 years that yield 93 basis points more than benchmarks, according to data compiled by Bloomberg.