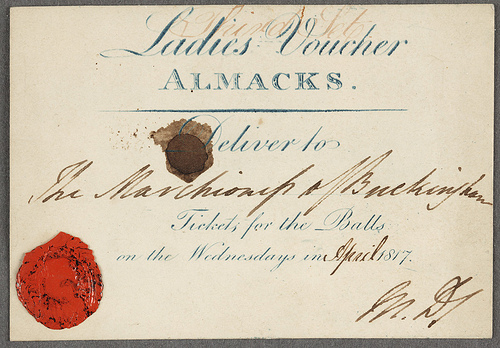 Voucher to Almack’s | Flickr – Photo Sharing! – “Voucher to Almack’s It was the hottest A-list invitation sought after by Regency society: A voucher (or ticket of admission) to a ball at Almack’s assembly rooms in London. Only society’s elite were granted these coveted passes. To be stricken from the list was social disaster. This voucher to Almack’s was issued in 1817 to Anna Elizabeth Grenville, Marchioness of Buckingham—who obviously cherished it enough to safeguard it for posterity.” Huntington Librrary

Who’s Pirating Game of Thrones, And Why? | TorrentFreak – “With over 3 million downloads per episode, the HBO hit series Game of Thrones is without doubt the most pirated TV-show of the season. Data gathered by TorrentFreak shows that most of the pirates come from Australia, while London tops the list of pirate cities. But why have these people turned to BitTorrent? In a few hours a new episode of Game of Thrones will appear on BitTorrent, and a few days later between 3 and 4 million people will download this unofficial release.”  Torrent Freak  Personal Note: Read the comments. The torrenters talk about lack of access and censorship as being reasons why they torrent. (as an aside, auto correct changed “torrenters” to “tormentors.”

Why Cheap Customers Cost More | SachaGreif.com – “I was listening to Patrick McKenzie’s podcast (with Amy Hoy as a guest), and they touched on something that I had heard before: when you offer multiple plans for a service, the cheapest plan’s customers tends to require the most support.” Sacha Grief   Personal Note: This is inline with what many business owners have said about their Groupon experiences.

Momentum Drops DRM! | Momentum – “MOMENTUM BOOKS, Pan Macmillan Australia’s digital-only imprint, today announced that by early August all its titles would be released without DRM. DRM – digital rights management – is the software used on digital content to prevent casual copying by users. ‘The problem,’ said Joel Naoum, Momentum’s publisher, ‘is that DRM restricts users from legitimate copying – such as between different e-reading devices. We feel strongly that Momentum’s goal is to make books as accessible as possible. Dropping these restrictions is in line with that goal.’ The move by Momentum follows recent announcements by sister company Tor in the United States and the United Kingdom. Momentum is the first imprint of a major Australian publisher to drop DRM.” Momentum Books

Stacked: On Blogging: An Unconventional Blog Tour – “One of the best parts about blogging is getting to know other bloggers and not only getting to know them, but actually learning from them. Every blogger brings something different to what they do, be it by the way they approach writing or reviewing or by virtue of having a background or experience outside of blogging that influences them. It’s from that thought where Liz and myself starting thinking: wouldn’t it be neat if a bunch of bloggers tackled a topic about blogging — ethics, politics, practices, etc. — that allowed them to really share the knowledge or background they have on those topics? Stacked

Some of the following are duplicative of previous postings.