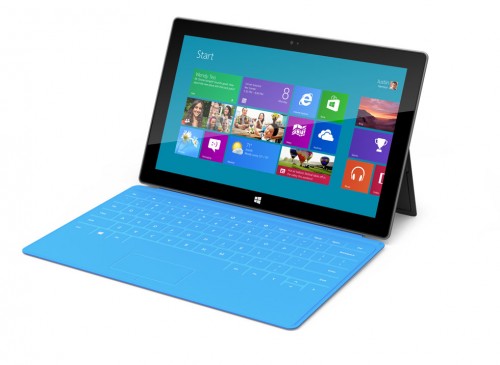 Microsoft held a press event wherein they announced their new tablet called Microsoft Surface. It’s a beautiful, lust worthy device. The only problem? No price or ship date. Nonetheless, here are some specs. The basic design includes an integrated kickstand, two covers with integrated keyboards, and a touchscreen that recognizes and differentiates between finger input and pen input. There are two basic models:

There was no mention of Barnes & Noble although I suspect that there will be a nook app that comes preloaded on the device but I also don’t have any question that Kindle and Kobo and Sony will be close behind. It’s Windows OS after all.

Why the Waterstones/Amazon Deal is Like Vichy France | Publishing Perspectives – “Some strange pricing situations may now occur in Waterstones stores in the autumn. Since the company will continue selling other formats, it is conceivable that the same title, if non-agency, will be at two different prices in what appears to be the same “shop.” Waterstones.co.uk will have the epub version at one price but will also allow customers to download the Kindle version at what will surely be a lower price.  …. ” The agreement with Amazon is not exclusive,” Daunt says. “We continue to sell non Kindle e-books and these may vary in price to Amazon’s. The Kindle e-book price, of course, is the same. We have lived for a long time with a price variance to Amazon, but also a price differential between our own ecommerce site and our shops. Of course, there is also a difference in the price of individual titles between shops. No different then, to the John Lewis Partnership, and very few customers find this common retail practice to be odd.”” Publishing Perspectives

More info on the Waterstone’s / Amazon deal. This looks to be a mess. Can our UK readers chime in on this?

Clearly Sargeant’s moves for Macmillan in the price fixing case was with the approval of his superiors.

Fair Use, Art, Swiss Cheese and Me – NYTimes.com – “And yet, such exotic questions are now before the United States Court of Appeals for the Second Circuit, where a three-judge panel will rule on a case with serious implications for the visual arts. In the fall of 2008, the Gagosian Gallery in New York exhibited a series of works by Richard Prince. Those works incorporated photographs that Mr. Prince had found in a book by the French photographer Patrick Cariou. The photographs were of Rastafarians living in the mountains of Jamaica. Mr. Prince borrowed one such photograph — a Rastafarian against a dense growth of plants — covered the man’s eyes with blue circles and placed an electric guitar in his arms. Mr. Cariou sued Mr. Prince for copyright infringement.” NYTimes

Lawsuit between origami enthusiasts unfolds | The Madeleine Brand Show | 89.3 KPCC – “Picture a square grid full of crisscrossing lines and overlapping shapes. A crease pattern looks like a graph in an algebra textbook or abstract painting. And that’s where the lawsuit begins. Sarah Morris is an abstract painter. Awhile back, she started exploring modern origami. So Sarah Morris took a bunch of crease patterns, changed some lines, added colors to the shapes and turned them into very large paintings.” SCPR

Sounds like she reversed engineered Robert Lang’s origami creations. He wants credit. She refuses to give it. Perhaps he wants money too but the article doesn’t say. This is fascinating. Is the origami pattern of Robert Lang’s copyrightable and if so, is Sarah Morris’ work transformative enough? These two fair use questions are fascinating.

Amazon is having June The Big Deal