This week is banned book week, a week that celebrates literature and reminds us all to remain vigilant against efforts to remove books from our libraries. The books challenged aren’t on how to make a dirty bomb or how to organize your own chapter of the KKK but books that have dirty language in them (To Kill a Mockingbird

) or homosexuality (and Tango Makes Three

). Oh, the horrors. I think I will buy a banned book today and donate it to my local library.

by  Vivi Andrews In addition to the Kindle and Nook giveaways, Samhain is partnering with Borders and Kobo for a special week-long promotion. From October 4 through October 11, the following titles will be available for free on Borders.com and Kobobooks.com. 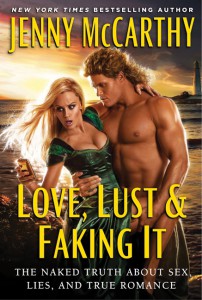 Avon sent me the promotional copy for Jenny McCarthy’s book LOVE, LUST, AND FAKING IT: The Naked Truth About Sex, Lies, and True Romance and I just had to share the cover. I don’t think the man is Fabio but he should be. I actually thought the excerpts from the book made it sound interesting. I might have to ask for a review copy. McCarthy sounds like the queen of the self deprecating remark and I love that tone.

Looking at Love, she explores the entire arc: from first love to dating, from getting dumped to breaking up. With a hilarious lack of self-pity, she draws on her own wild experiences to share her thoughts on everything from foolishly getting a tattoo while drunk to the always poignant moment of saying good bye to true love ("I was still deeply, deeply in love with Tony Lobianco, but felt a yearning to go see the world. I told him to meet me at White Castle on the corner of 79th and Pulaski.") Sex, never far from the discussion, takes center stage in the Lust section, as McCarthy share her own fantasies ("Sometimes fantasies are better off staying just fantasies") and muses on threesomes, boobs, blow jobs, and the differences between men and women ("I still think it's cruel that we weren't born with the same sex drive as men, but statistics say men usually die before women so I guess we get one bonus in the death department.") And in "Faking it," she reveals how women fake it beyond the bedroom, assuming facades they hope will win them love and approval, and offers her own story as a cautionary tale ("Every magazine I would open up, I was making a wacky face. I kept talking about being this free-spirited, wacky, fun chick, when all I did was sit at home every weekend and play chess with my fifty-year-old boyfriend.") 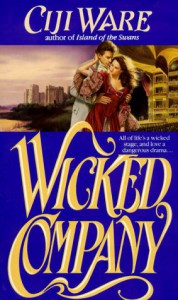 Speaking of old school covers, I finished up the October new releases page (I’m late, I know), I noticed this cover by Ciji Ware. It’s published by Sourcebooks and looks very old school – not so much the characters, but the color, layout and font.   I wonder if I was in a bookstore whether I would think that this was a used book.

Richard Curtis at eReads speculates that enhanced ebooks may create problems in making movie deals due to enhanced ebooks requiring interactive rights to be ceded to a publisher.   One literary agent has sent out a notice to film agents that “we will no longer be able to agree to the boilerplate language in most studio option/purchase agreements that address multimedia.”

But really, do studios even need rights to make movies based on books? Only if they want to stick close to the book’s contents.   Take a look at the ruling that was released last week which found that Steven Spielberg’s remake of Rear Window was not copyright infringement of the original short story.   Disturbia cast Shia LeBouf as the role of a housebound teen spying on his neighbor who may have committed a murder.   The federal court judge found that the insertion of sub plots, humor, and teen romance made the movie sufficiently different from the original short story.

Ideas are not copyrightable.

I wasn’t going to write about this when it was first sent to me by a kind reader but then I discovered that Christopher Pike was sock puppetting on Amazon and it became hilarious to me because who doesn’t enjoy a good Candace Sams event.

Here is the timeline:

1) Reviewer takes issue with Christopher Pike’s Secret of Ka because the first twenty pages were so factually incorrect that Pike would obviously not beat a fifth grader in geography. Or use of Google. Because he gets the capital of Turkey wrong on the first page. And refers to Turks as Arabs. And uses the word Papi as Turkish for Grandfather when it is really Dede.

2) Michael Brite comes forward to take the reviewer to task. The comment was deleted but preserved here. Michael Brite puts himself forward as some kind of editor of Pike’s ending his “rebuttal” with this gem: “Pike is flattered that his book made such a deep impression on you that you would want to go to so much trouble on his behalf. Pike embraces fans of all types, especially the crazy ones. “ The rebuttal refers to Brite as not having made the mistakes but those are someone else’s fault and how Brite always accepts blame for his mistakes.

3) Brite is then found out to be Christopher Pike:

This is Pike,
This is the real Christopher Pike, ignore the name this response appears under. I use many names online. The Eternal Dawn is a sequel to the other books. Sita is alive and well and the book explains in detail why Seymour portrayed her as dead at the end of the sixth book. Seymour is in the new books, although he does appear until half way through the first book. I feel the new ones are stronger than the old ones. Thirst 3 will be about 400 pages. I’m finished writing the main story but I’m in the editing stage. Yours, Pike

Rereading the comments left by Brite in that context is hilarious.

Pike would probably laugh at such an email.

1. Pike would be the first one to accept blame for any mistakes in his book.

Obviously Pike would not laugh at such an email or accept blame for any mistakes in his book.