Agents are far more powerful in publishing than many readers understand.  They are the ones negotiating contracts with the publishers and can doom or help an author.  They are the ones telling authors that x isn’t selling and y isn’t selling.  They are the unseen gatekeepers that rarely get mentioned.  But the fact is much of what we see published today is what an agent thinks is saleable, not what editors think is saleable, but what agents have decided can be sold. DRM, I’m told, is something agents want.  Geographical restrictions is another thing agents push.

If you wonder why there aren’t people of color, GLBT people, in books?  Maybe look to the agents.  Here is a chilling piece at Genreville about two well known authors being shot down by agent after agent for having a gay lead.  It is a must read.

Author’s Guild has turned into a plaintiff’s class action.  The Google Settlement is dead in the water and the AG must decide, along with the other plaintiffs, whether they are going to pursue a costly litigation that may end unfavorably toward them.  They can’t really dismiss the petition and so they’ve doubled down on spending their authors’ dues on more litigation but this time against research institutions.  (I had no idea that the AG was so flush!)  Yesterday, AG and a few others, filed suit against the Hathi Trust. (PDF of Petition) Essentially the Hathi Trust is a partnership of educational institutions that are combining resources to digitize the various institutions different libraries.  AG views this as a (and this is a direct quote from the petition) “potentially catastrophic, widespread dissemination of those millions of works in derogation of the statutorily-defined framework governing library books.”

Part of the AG’s complaint is that the HathiTrust did not digitize these books themselves, but “ingested” the digitized books from Google. The thrust of that argument, I suppose, is that someone cannot profit from the fruit of the poisonous tree. Google being the poisonous tree. Another argument that the AG is making is that in the process of running the trust, several digital copies are made.

Upon information and belief, HathiTrust’s storage architecture employs two synchronized instances of server farms (each including at least two web servers, a database server and a storage cluster), with the primary site located at UM’s Ann Arbor, Michigan campus where ingestion occurs, and a redundant mirror site located at IU’s Indianapolis campus. HathiTrust also routinely creates tape backups of all data contained in the HDL. The tapes are stored at a different facility on UM’s campus and, upon information and belief, these tapes are replicated and the copies are stored at yet another facility on UM’s campus. Thus, once a University distributes a digital object to the HDL, at least eight digital copies of the work (four image files, four digital-text OCR files) are generated.

Think about this. Every time you back up your files, either to an SD card or to dropbox, AG is arguing you are making an unauthorized copy.  I don’t know if the RIAA has made such ridiculous and anti-use copyright arguments.

AG is demanding that the HathiTrust cease all of its activities, stop sharing with Google, and that the Court impound the already digitized volumes and “held in escrow under commercial grade security” and that such network be disconnected from the internet. And, of course, that the plaintiff’s be awarded attorneys’ fees and costs. This is a big battle but probably a necessary one.

I have really mixed feelings.

Obviously public domain stuff is easy, and they should be doing that first. But the “orphaned works” part is what I’m conflicted about. The way I read it (please correct me if I’m wrong), it’s up to the copyright holder to contact the Trust. All they do is put a notice on their website saying there is no clear copyright holder. But why isn’t it *their* responsibility to try and track down the rights holder? If a library buys a book, the author doesn’t necessarily know that, and so the heirs wouldn’t either. Suddenly, by virtue of it being in the U of Michigan library, it’s “orphaned” and UM & Google can slap it up online.
OTOtherH, the more material that’s in the public domain, the better. I just worry that the burden of proof is on the wrong people. UM & Google & the other libraries want to do this, so presumably they will derive benefits (I don’t believe it’s *only* about providing a public good, sorry). Then the burden should be on them.
I am thrilled that the pre-1923 stuff is being digitized, and I am thrilled that Google & the British Library are in partnership to digitize the public domain holdings. It’s already made my research easier.
Also, the argument that UM will only make the orphaned work available to students and faculty is a red herring. I find copyrighted materials (chapters of scholarly books, journal articles) on line ALL THE TIME. Unless they vigilantly police their students and faculty (which they sure as hell aren’t doing right now), all the stuff people are most interested in will wind up on the internet.
I read this article for backstory:  http://bit.ly/pox2TG

A mysterious artist is leaving sculptures created out of books at various literary locations in Edinburgh.  The sculptures are beautiful and support the concept of paper books.  The creator has not stepped forward.  There is some kind of irony that deconstructed books are being used for these sculptures. 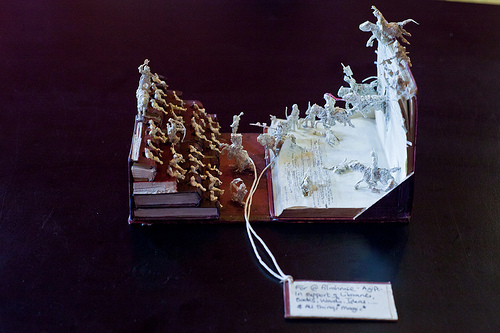 Ned believes that at some point in the future animation will be so realistic that there will be no need to hire actors for their faces, only for their voices.  A New York Times article suggests that writers might be the next set of creators to be replaced by technology.  Narrative Science has developed a program based on artificial intelligence that is now being used, amongst other things, to write news wires for sports.  The creators believe that in five years, a Pulitzer Prize will be won by a work  written by Narrative Science.   After reading this article, I have little doubt that at some point in the not so distant future, there will be fiction books, in part, written by these programs.

Fast Company argues that Apple and Amazon are pushing toward segmentation of books for increased profit.  It makes sense. Sell a chapter for $1.00 and you’re making 2-5x more money than if you sold it individually.  I dislike this idea intensely. On the one hand I think there is a place for serialization but if this was the primary way in which books were sold, I’d balk.