I am trying to create a new way to bring the upcoming new releases (searchable/sortable table) for easy browsing. With the release of the new Calibre OPDS from David Pierron, I’ve put together this wonderful cover collection of releases, sorted by month. I used the tag feature to = month. Feel free to click around, though, because you can browse by author and title as well.

We also have updated lists from Harlequin’s backlist titles and Avon’s digital efforts as well and the entire Sourcebooks 2010 list. Keep checking back. I update these lists about every two weeks.

From Reader Kay is an article in the Wall Street Journal about the 50 covers that were created for Girl with the Dragon Tattoo. The designer of the cover had no formal graphic design experience:

Mr. Mendelsund, age 42, graduated from Columbia University in 1990 with a degree in philosophy and worked as a professional musician for more than a decade before embarking on a design career. With no formal graphic design experience, he began drafting CD album covers for an indie label.

On the issue of covers and “otherness” is the passing of Cindy Pon’s book, Silver Phoenix. (reviewed here by Jia). The major YA book buyers passed on this book meaning that it wasn’t on the major brick and mortar retailer shelves. The unsaid reasoning here is that books with Asians on the cover won’t sell. Thus the cover for Cindy Pon’s next book is this: 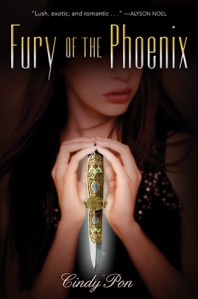 It’s sad that bookstores continue to perpetuate institutional racism by segregating books and passing books based on the color of the person on the cover. Amy of My Friend Amy, penned an open letter to Borders and BN. Call me cynical, but I doubt anything is going to change.

Which is why Julie Ortolon’s post yesterday has so much meaning. The post entitled “Readers are the big winners in the ebook revolution” highlights how books of diversity can be successful.

The economics behind that are complicated. Suffice it to say, publishers aren't willing to take a chance on a novel unless they think they can sell tens of thousands, or hundreds of thousands of copies. That's why Western romance, and many other sub-genres have vanished from the shelves. The audience isn't big enough to make it profitable for a major publisher to put those books out in print -‘ no matter how wonderfully written they are, or how much the devoted fans want them.

Once again, good news. It is profitable enough for an individual author to re-publish or self publish romance novels for these niche markets.

Now, I don’t think that books about Asian girls are necessarily a niche book, but I do think that the more that we can remove the gatekeepers who are used to making race based decisions, the better we are as readers.