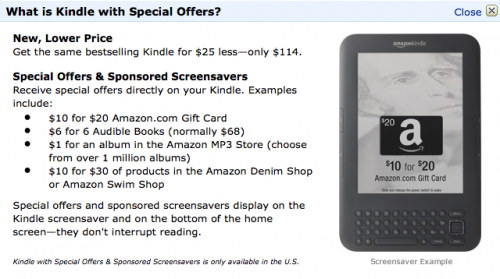 Amazon is offering a new discounted Kindle.   The catch is that the screensaver and home screen of the Kindle will feature ads.   The discount is only $25.00 and available only in the U.S. I’m not convinced that $25.00 is worth it and I think this signals in book advertising in some manner is on the horizon.   What is interesting is that these coupon codes, like the one shown in the ad above, will ONLY be available to the Amazon Kindle with special offers. If Amazon kept offering gift cards like the one in the screensaver, even I would be moved to get the Kindle with benefits.

In fact, 24Symbols, a Spanish company, is looking to bring ad supported content to the readers.   I’m not sure if it is a US oriented endeavor or a Spanish one or a European one.   The site is in English.

New Zealand author Nalini Singh is being sent on tour in the U.S.   This tour culminates with an author tea, much like the ones that HarperCollins has been experimenting with.   (It is, in fact, co sponsored by HarperCollins).   There are different pricing tiers which allows you VIP seating and/or seating with an Author of your choice (the most expensive at $75.00). I’m still of the opinion that this program is being tested to see if it can make money.   Each event has been a little different with different price tags. I think HC and other publishers are experimenting and frankly, I think that is smart.

A blogger cites some disturbing reading statistics from a study by the Jenkins Group. I can’t find the study at the Jenkins Group website although I have emailed to request more information.

According to this study, kids need to read to get ahead.   The lede is that kids who read go to universities and kids who play computer games don’t.   (Everytime I read this article, the song by Cake “Sheep Go to Heaven/Goats Go to Hell”).   The conclusion of the article, however, confuses the issue:

The research suggests teenagers who spend a lot of time playing video games should not worry too much about their career prospects. Playing computer games frequently did not reduce the likelihood that a 16-year-old would be in a professional or managerial job at 33, the research finds. Mr Taylor's analysis also indicates that children who read books and did one other cultural activity further increased their chances of going to university.

So who knows. I think the Guardian (where the article was published) wants people to read. Cake wants you to be a sheep.   Or a goat.

Speaking of Cake, this is a hilarious video:

At the London Book Fair this year, CEOs stated that digital books mean paying closer attention to the consumers.

"At every step, something dramatic is happening," Makinson said, from different forms and formats, to apps, mobility, and social networking activity, and “the changing character of content,” is shifting the role of publishers, and forcing them to learn new skills. This includes a more direct relationship with consumers and the need for better pricing analytics. "We have to understand what consumers want, and what they are prepared to pay," he said.

Makinson is the Chairman of the Penguin Group.   The consumers are talking and maybe the publishers are listening but maybe they are not.   Apparently there is a new premium paperback being produced.   The first one sighted was J.A. Jance’s Queen of the Night.   Noted as a mass market but sold for the price of $11.99, this product somehow falls between the mass market and the trade paperback in terms of price and size.   I’m not sure what consumer group was clamouring for this.

Consumers over at the Kindle boards usually have a lot to say about price.   Look at Michael Connolly’s reviews at Amazon.   Over 132 of the 199 reviews are one stars and those one star reviews given are primarily complaints about price.   The top low starred   review discusses the issue of price:

I notice that some people have a problem with reviewers commenting on the Kindle price for this book and others. Turns out that this is the only real forum for readers and fans to let the author and his publisher to know how much we despise this practice. There is no legitimate justification for charging prices for e-books that are higher than physical book prices.

The Smithsonian Magazine had a fascinating article about gender and clothing.   It starts out showing a picture of a child wearing a dress and holding a hat with feather trim.   That child is not a girl but it is FDR.   In 1884, when the photo was taken, it was the cultural norm for all children under the age of 6 or 7.   Jo B. Paoletti explores the gender division of clothing in Pink and Blue: Telling the Girls From the Boys in America.   I’ll have to see if I can get that book from my library.

The Flip is officially dead.   The FLIP is a dedicated video camera designed to take short movies but apparently with smart phones and digital still cameras incorporating video recording capabilities, a dedicated device couldn’t withstand the competition.   Is this a harbinger of things to come for all dedicated devices?

→ Jane
Previous article: How to Do “Exotic” Right: Eileen Dreyer’s Never A Gentleman
Next Post: REVIEW: Fury of the Phoenix by Cindy Pon