B&N’s Nook Tablet Sales This Year Ranged Between Diddly to Squat – Barnes & Noble is betting on the Nook to save its bacon and with the declining number of eink purchases, the Nook tablets are being pushed hard. The problem with the Nook tablets is that they are overpriced (as compared to other comparable Android tablets) and worse, they lack content. Tablets are for watching video, playing games, and browsing the web. It’s about robust apps and music and multimedia. B&N’s tablets are capable of doing all those things but they lack the actual content. In order to watch a movie, for example, you have to stream it live or actually learn how to rip your own digital movies (which some studios argue is a violation of copyright). If you want to listen to music, you buy it from Amazon or Apple and then figure out how to sideload it onto a device. Most people either don’t want to do this or don’t know how. B&N’s lack of ability to offer content that matches its device is killing itself as evidenced by the abysmal numbers this year. In quarter 1, B&N accounted for 3% of the tablet market and in quarter two, it fell to 1.9%.

“According to iSuppli’s analysts, B&N sold only 459 thousand Enhanced ereaders last quarter, and they sold around 614 thousand in Q1 2012. In contrast, Amazon is estimated to have sold over a million Kindle Fires each quarter.”The Digital Reader

The New Tablet Reality for E-Books: Will Readers Read Less? – Forbes suggests that the slow down in growth of ebook adoption may be attributable to tablet growth. If you have a tablet, ebooks are competing for the owners attention with other things like facebook, games, and social interaction with others. I wrote an article a few weeks ago about why publishers needed to invest in greater digital lending because library access can foster readers. The last thing that publishers can afford is to lose readers to other forms of entertainment. Forbes 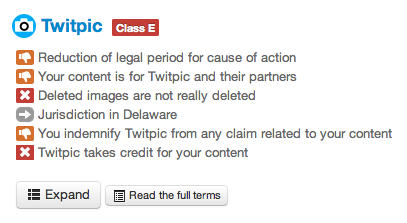 Terms of Service; Didn’t Read – This is a stupendous service. A group of individuals are reviewing and then rating the Terms of Service for many of the popular internet services around the web, trying to distill each lengthy document into consumable and understandable points. If I had more time, I would totally join. Maybe I can twist Robin’s arm into joining.

“Making the fine print easy to understand…Each data point will be assigned a weight in the rating of the website in question as soon as there is a rough consensus in the mailing list thread. So the classification of each website simply depends on how many positive and negative data points we have posted about it on the mailing list.”Terms of Service; Didn’t Read

“Quantity was key. De Graff knew that if he could print 100,000 paperbound books, production costs would plummet to 10 cents per copy. But it would be impossible for Pocket Books to turn a profit if it couldn’t reach hundreds of thousands of readers. And that would never happen as long as de Graff relied solely on bookstores for distribution. So de Graff devised a plan to get his books into places where books weren’t traditionally sold. His twist? Using magazine distributors to place Pocket Books in newsstands, subway stations, drugstores, and other outlets to reach the underserved suburban and rural populace. But if Pocket Books were going to sell, they couldn’t just stick to the highbrow. De Graff avoided the stately, color-coded covers of European paperbacks, which lacked graphics other than the publishers’ logos, and splashed colorful, eye-catching drawings on his books.”Mental Floss

Amazon’s Next Kindle Fire Android Tablet Clears the FCC – Nate points out a new filing by “Harpers LLC” has cleared the FCC. According to Nate, Harpers LLC is a front for Amazon and has been used by Amazon in the past to try to sneak through FCC documents without revealing their launch plans to the world. The specs for the device in the FCC papers hint at a 10″ tablet. The Digital Reader