Thursday News: The changing marketplace for goods is eliminating the line separating brick and mortar and online stores

First, tomorrow is our Book Club discussion of The Last Hour of Gann by R Lee Smith. I asked the author some hard questions and she took them on. I think it was one of the more interesting and provoking author interviews partly because I’m a pretty inept interviewer but mostly because Ms. Smith really gave us some no holds barred answers. Hope you join us.

I liked this book and so did Kati so I agreed to post the new cover for Lick by Kylie Scott. I think the cover reveal was supposed to be yesterday but there are all these rules (time to post etc) so today’s the day at Dear Author! This will be Momentum’s first international publication and will be in stores May 2014. 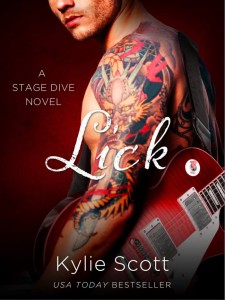 Bookworld transforms bus shelters into pop-up bookshelves for Christmas – Amazon has launched a store specific for Australians so its a smart marketing move for Bookworld, an online bookstore, to launch pop up bookshelves in bus shelters in Sydney. Commuters are encouraged to help themselves and encouraging residents to buy local even if it is online. mUmBRELLA

In Amazon and Walmart’s Battle for Dominance, Who Loses Out? – This is a great, in depth article (unlike the New Yorker piece) about Amazon, Wal-mart, eBay and Google’s struggle for dominance over the wallets of consumers. With same day delivery, the lines separating online and brick and mortar is being rubbed out.

Local retailers without a large presence are feeling this so keenly they are taking punitive action. Target, for example, is threatening to blacklist vendors (and I’ve heard that they are becoming to publishers what Walmart was in the 90s). For smaller retailers, the recommendation is to hook yourself to a distributor like eBay that is presenting same day delivery or move into products that render themselves to in person shopping. [email protected]

Amazons Unpopular Kindle Proposition – The New Yorker article is predictable. Indies don’t want to get in bed with Amazon but one of the arguments is that Kobo presents a serious alternative to Amazon. The New Yorker says that Kobo has a “small but growing market share” but according to the expert witness report in the DOJ publishing lawsuit, Kobo shared a 2% portion of the digital book market with Smashwords, All Romance, and the like. Amazon, BN, Apple, and Sony accounted for 98%.  The New Yorker