Thursday News: David Gilmour, professor of being racist and sexist

David Gilmour on Building Strong Stomachs – David Gilmour gave an interview to Random House Canada that has to be up there in the top echelon of interviews given by mysognistic you know whats. He teaches at the University of Toronto although he has no doctorate. His goal is teaching books to about real men. Real men, to Mr. Gilmour, are those who suck menstrual pads and are hetereosexual. At least that is what I got from the interview. Oh, and almost every female writer sucks. Also the Chinese.

I’m not interested in teaching books by women. Virginia Woolf is the only writer that interests me as a woman writer, so I do teach one of her short stories. But once again, when I was given this job I said I would only teach the people that I truly, truly love. Unfortunately, none of those happen to be Chinese, or women.

There are men eating menstrual pads, and by the time my students get to that they’re ready. Roth has the best understanding of middle-aged sexuality I’ve ever come across.

I teach only the best. What happens with great literature is that the shadows on the pages move around.

But he is not racist or sexist or homophobic he says in an apology prompted by his publisher HarperCollins:

Q: Have you spoken to anyone from HarperCollins?

A: I talked to Patrick Crean. He was concerned that this was going to affect the general climate around the book, that some women might not like the book if they think that that’s my policy. And that’s one of the reasons that I’m apologizing. Normally I actually wouldn’t.

Penguin Ebooks Return to OverDrive, Go National on Axis 360 – Penguin has finally decided to offer up its entire catalog to Overdrive and Baker & Taler.  The books are offered for a one year term on a one copy/one user lending model and then the library has to repurchase the books. The US libraries will get them first followed by international libraries. 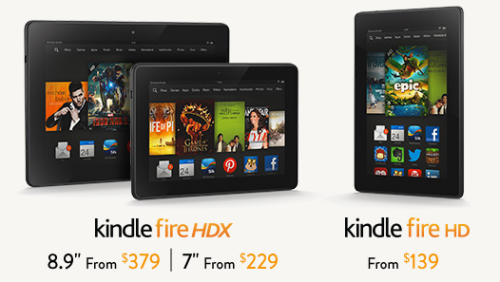 
But the software is really where it shines. They’ve added a Mayday button. For free you can connect to an Amazon “expert” 24×7, 365 days a year.  It sounds like it is Siri but a real live person. Privacy experts might not like that the Amazon tech person can actually take over your device, but for adult kids who want to buy their parents a tablet? This is like a godsend. No, ma, I don’t understand why you can’t send a message to Aunt Peg on her iPad. Just MAYDAY it.

The other two big software features include allowing you to download Amazon Prime movies for offline viewing; watch your movies that are on your Kindle Fire on a television and use your Kindle Fire in tablet mode; and yes, Cloud Collections which will allow you to organize both your books and your apps into folders that sync across your “kindle devices and reading apps.”   Amazon

Jeff Bezos explains the next step in Amazon’s strategy — the ‘hardest and coolest’ part – This is an interesting interview with Jeff Bezos but I particularly liked the end where he was asked about the WashPo employees “weighing in publicly on what sort of management style he should have as the new owner of the newspaper. ‘I will take all the advice I can get, that’s what I think about that,’ he said, punctuating the comment with his trademark laugh. ‘Bring it on.'”